The VBA Editor in Word

We’ve seen some of the syntax and structure of the VBA language. Next we need to examine the Word VBA developer’s environment, the window where you create and modify code. Like the other Office applications, Word uses the Visual Basic Editor as its development environment. 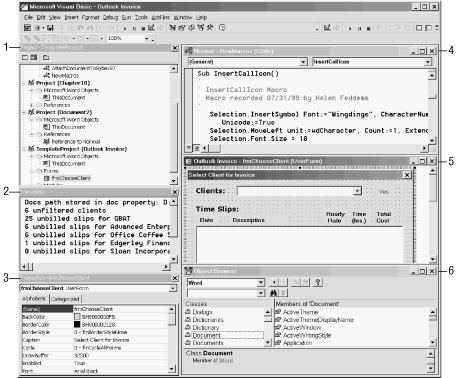 The major components of the VBA window are:

The Project Explorer and Properties Window

The Project Explorer window (the Project-TemplateProject window in Figure 18-5) contains open projects, displayed in a tree structure. To the Word VBA editor, a “project” is any open document (including templates). In Figure 18-3, normal.dot (which doesn’t show in the figure), a document named Chapter 18, another document named Document2, and ...

Get Word 2000 in a Nutshell now with the O’Reilly learning platform.