Getting the Message Out

The second classic pattern is one-way data distribution, in which a server pushes updates to a set of clients. Let’s look at an example that pushes out weather updates consisting of a zip code, temperature, and relative humidity. We’ll generate random values, just like the real weather stations do.

Example 1-6 shows the code for the server. We’ll use port 5556 for this application.

There’s no start and no end to this stream of updates; it’s like a never-ending broadcast (Figure 1-4). 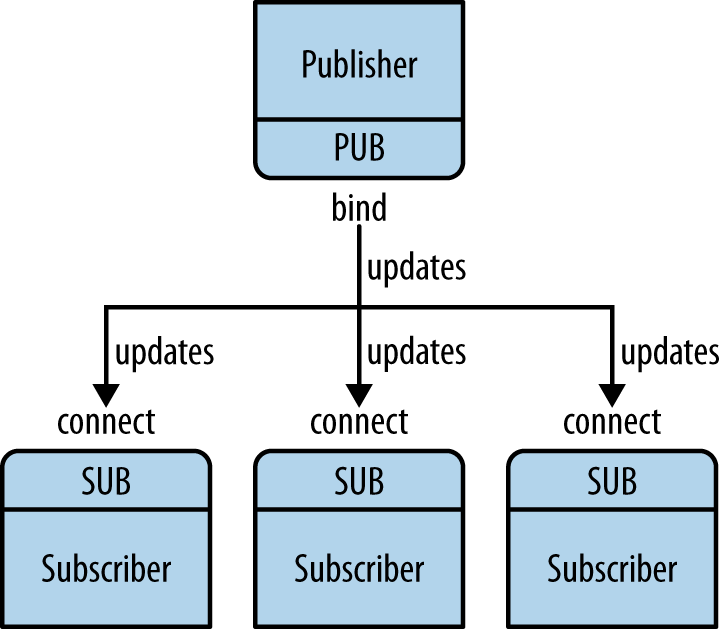 Example 1-7 shows the client application, which listens to the stream of updates and grabs anything to do with a specified zip code (by default, New York City, because that’s a great place to start any adventure).

The PUB-SUB socket pair is asynchronous. The client does zmq_msg_recv(), in a loop (or once if that’s all it needs). Trying to send a message to a SUB socket will cause an error. Similarly, the service does zmq_msg_send() as often as it needs to, but must not do zmq_msg_recv() on a PUB socket.

In theory, with ØMQ sockets it does not matter which end connects and which end binds. However, in practice there are undocumented differences that I’ll come to later. For now, bind the PUB and connect the SUB, unless your network design makes that impossible.

This “slow joiner” symptom hits enough people, often enough, that we’re going to explain it in detail. Remember that ØMQ does asynchronous I/O (i.e., in the background). Say you have two nodes doing this, in this order:

Making a TCP connection involves to and from handshaking that can take several milliseconds (msec), depending on your network and the number of hops between peers. In that time, ØMQ can send very many messages. For the sake of argument, assume it takes 5 msec to establish a connection, and that same link can handle 1M messages per second. During the 5 msec that the subscriber is connecting to the publisher, it takes the publisher only 1 msec to send out those 1K messages.

In Chapter 2, we’ll explain how to synchronize a publisher and subscribers so that you don’t start to publish data until the subscribers really are connected and ready. There is a simple (and stupid) way to delay the publisher, which is to sleep. Don’t do this in a real application, though, because it is extremely fragile as well as inelegant and slow. Use sleeps to prove to yourself what’s happening, and then read Chapter 2 to see how to do this right.

The alternative to synchronization is to simply assume that the published data stream is infinite and has no start and no end. One also assumes that the subscriber doesn’t care what transpired before it started up. This is how we built our weather client example.

Some points about the publish-subscribe pattern:

This is how long it takes to receive and filter 10M messages on my laptop, which is a 2011-era Intel I7—fast, but nothing special: