Is it possible for an AI to create revolutionary art? 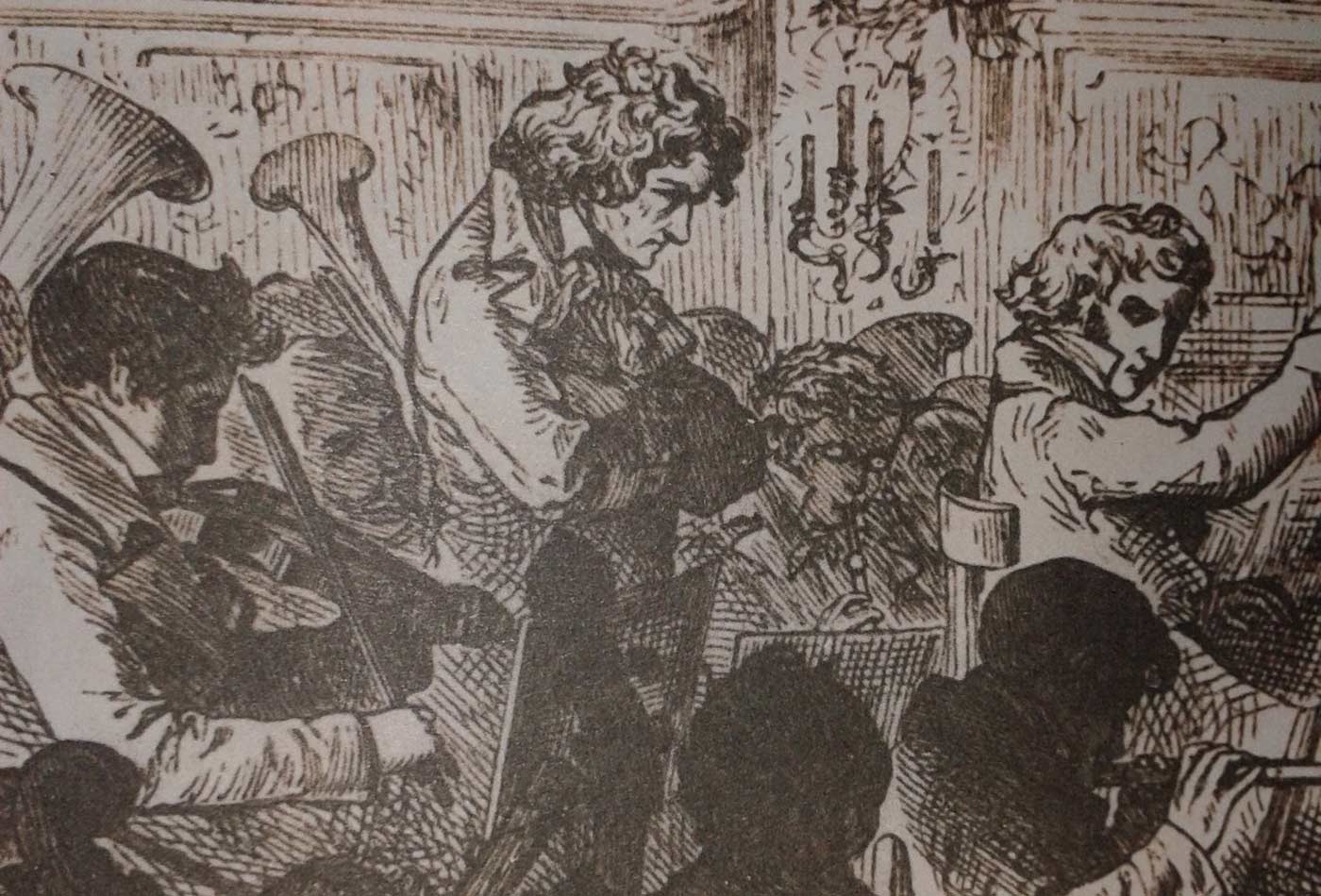 A 19th Century print depicting the first Performance of Beethoven's 9th symphony with Beethoven drawn in the middle of his orchestra (source: Wikimedia Commons)

With the progress we’ve seen in artificial intelligence over the past year, there’s been a lot of excited talk about AI and creativity. Can we make AI systems that are creative? And what does that mean? We’ve seen AIs that can write relatively formulaic newspaper stories, paint new Dutch Masters, apply Van Gogh’s style to arbitrary pictures, and and play Go brilliantly. But is that creativity? As the clichéd question goes, “Is it art?”

Questions about creativity are tough because we don’t really know what “creativity” is. We have industries devoted to the production of formulaic pieces for mass consumption. We talk about the “movie industry” and the “music industry,” and those terms are absolutely right, because while movies and music are undeniably creative at some level, the industries are primarily about pushing out a lot of product and getting people to buy it. This year’s “the same” isn’t exactly the same as last year’s “the same,” but art that’s produced and marketed for mass consumption can’t afford to be too different or strange.

On the other hand, we have a notion that an artist is someone who creates taste rather than reflects it, someone who breaks the rules, who creates things of a kind that didn’t exist before. These are the artists who create radical art.

It’s worth looking at a radically creative artist to see what this fuss is about. As a classical pianist, I’ll choose Beethoven, who was probably the most radical composer in the history of music. What made Beethoven unique in the first place? Could a computer create music that’s equally groundbreaking?

Everybody is familiar with Beethoven’s 5th symphony, and that’s the problem: we’re so familiar with it that we’ve forgotten how strangely it starts. The first movement is built entirely from a theme that’s really just a four-note fragment. Da-da-da-DUH. Then those four notes again, in another key. And again, and again, and again. Where are you going to go with that? This is not Papa Haydn.

Likewise, the Waldstein piano sonata has a 20 note theme, in which the first chord (C major) is repeated 16 times. Then the same chord again, but in another key. What’s going on? Beethoven frequently takes a relatively uninteresting tune, breaks it down into tiny pieces, and reassembles it in amazing ways. What’s he doing? He was never as good with a melody as Mozart; is he working from his weakness? Is he turning his deafness into an advantage? Maybe it’s not surprising that a composer who was going deaf would start a piece by pounding out the same chord repeatedly. It’s certainly no surprise that many of Beethoven’s contemporaries considered this noise.

The Opus 110 piano sonata is one of Beethoven’s late masterpieces. Like most piano sonatas, it looks like it has three movements. But does it? The second movement really moves straight ahead into the third, without a break. The so-called third movement starts with a long bridge that nobody knows how to play (the notation in measures four and five doesn’t make sense) into a lament. Then in measure 27, the lament suddenly becomes a fugue, also without a break. Then the lament comes back in the middle of measure 114; the fugue comes back in 137, with the theme turned upside down; and then all the parts scatter around in strange, uncoordinated ways to introduce a final section based on the fugue theme, but with big chords above a moving bass line. So: is this two, three, four, five, or six movements?

I can’t answer that question; there isn’t an answer, and that’s the point. Beethoven has turned the traditional sonata form into a problem. He’s taken it as far as it can go, and moved way, way beyond it. He broke it, and has done something profoundly new.

It wouldn’t surprise me at all if an AI trained on Beethoven’s works could “write” synthetic Beethoven symphonies or piano sonatas. I’m sure an AI would be good at breaking a larger theme up into parts and reassembling them in clever ways. It could certainly pick up characteristic gestures, like suddenly moving from fortissimo to pianissimo, or using the extreme ends of the piano’s range. But the ability of AI to imitate isn’t really the question. Imitation has never been all that hard. If you trained an AI with the entire body of Western music prior to Beethoven’s birth in 1770, could it come up with something equally radical? Or, if you had all the music up until 1960, would you get Hendrix, the Beatles, and Zappa? All of these musicians were working out of traditions and styles that came before, whether the high classical music of Mozart and Haydn, or the blues of Leadbelly and Blind Lemon Jefferson. But they also took those earlier traditions, broke them apart, and built something new and different.

But whether an AI can push an artistic tradition to a new level is only the start of the problem. Art is ultimately about humans: even if humans don’t create it, they’re the ones who look at it, listen to it, and decide whether or not they like it. With that in mind, it’s worth thinking about the reception of any radical art. There’s a common pattern: early on, a few cognoscenti love it, but the masses find it too difficult and hate it. Years or decades later, we worship it; then we find it boring. Chuck Berry’s “Roll over, Beethoven” is ironically good commentary on this process: Beethoven became boring precisely because he was worshipped, and that worship transformed performances into stodgy, grandiose parodies of “great art.” But there’s nothing unique about Beethoven. Talking about the decline of the music industry, Frank Zappa says:

One thing that did happen during the 60s was some music of an unusual or experimental nature did get recorded or did get released. Now look at who the executives were in those companies at those times. Not hip young guys. These were cigar-chomping old guys who looked at the product that came and said, ‘I don’t know. Who knows what it is. Record it. Stick it out. If it sells, alright.’ We were better off with those guys than we are now with the supposedly hip young executives who are making the decisions of what people should see and hear in the marketplace.

We were lucky to get the Beatles; if the record execs hadn’t said, “I don’t get it. What the hell.”, music would have taken a different course. Beethoven survived because, frankly, he was one of the biggest assholes in history, and nobody was going to tell him what to do. He had his fans amoung the avant garde, of course, but he certainly wasn’t easy listening for your typical concertgoer. And he didn’t care.

Now we’re at the heart of the problem of AI creativity. You can talk as much as you like about automating creativity, but the human is never out of the loop. At some point, humans have to look at whatever art works AI produces and decide whether they want more. That’s not a technical requirement; it’s a human one. If humans don’t like it, they’ll pull the plug. What happens to the algorithms when the listeners turn thumbs up or thumbs down? Will Spotify and Pandora (or, more precisely, their algorithms) take risks on challenging music? Or will the AI’s managers tweak the algorithm and retrain until the results are more marketable? If an AI wrote the 5th symphony, would a music exec say “pretty good, could be better, let’s tweak the model and get something people will really like”?

It won’t make a difference if the AI has a Beethoven-like ego. It won’t have the ability to forge ahead regardless of what contemporaries think. It will be at the mercy of record execs and program managers who aren’t likely to say “Who knows what it is… if it sells, alright.” Best case, we’ll end up with occasional bits of brilliance sprinkled through yottabytes of unwanted music in cold storage. And nobody will have the time or patience to go through it.

There’s a deeper point here. Is it important that this art was created by humans? With music, you could argue that we only want something to entertain us. There is certainly room for music-as-product; you need something to listen to in elevators. And you could even argue that when you’re listening to or performing Beethoven, you don’t care where the music came from. But there are art forms for which that isn’t true. Earlier this year, the Guardian published an article about computers writing poetry. Although these attempts were laughably bad (the Guardian called it Vogon Poetry), we can assume that future attempts will be much better. But why is poetry important to us? Is it because it’s a pleasing arrangement of words, or is it precisely because a human created those words? Music can be Muzak, but there’s no poetic equivalent, except perhaps greeting card verse. Greeting cards can be written by AI: I really don’t care. But I don’t think I’d care about the poems of Keats or the plays of Shakespeare if they hadn’t been written by a human. If Keats’ Bright Star were just a pleasing arrangement of words coming out of a carefully tuned neural network, would we be interested in them? I don’t think so.

By the same token, I don’t at all see why we need imitation Rembrandts or Van Goghs. Yes, there is a market for Elvis on Velvet, and perhaps even paintings in doctors’ offices. But art as product gets boring quickly. While I’m sure that AI systems can produce an endless stream of pop songs, fake Dutch Masters, and sentimental poetry, and while AI may even be able to reproduce the relatively minor changes that go from period to the next, I don’t think it’s likely that AI will be able to produce revolutionary art.

Could AI produce the next Beethoven, or the next Beatles, as opposed to just synthetic Beethoven or Beatles? I’m not saying that it can’t, but that’s a qualitatively different, and much more difficult, problem. At ZeitGeist, Mark Rumsen (as tweeted by Tim O’Reilly) said that “Anyone who says they can tell you what the future of music is is either lying, or they are from the future.” I certainly can’t predict the future of music, or of any other art form. But neither can an artificial intelligence. I’m confident that great art will continue to break rules and leap out in front of human cognition. It will be about breaking with established norms and making something new. Making those leaps will be difficult (though maybe not impossible) for an AI. But appreciating and understanding those leaps will be even more difficult for the humans who ultimately have to decide whether to let the AI continue creating. Nobody pulled Beethoven’s plug.