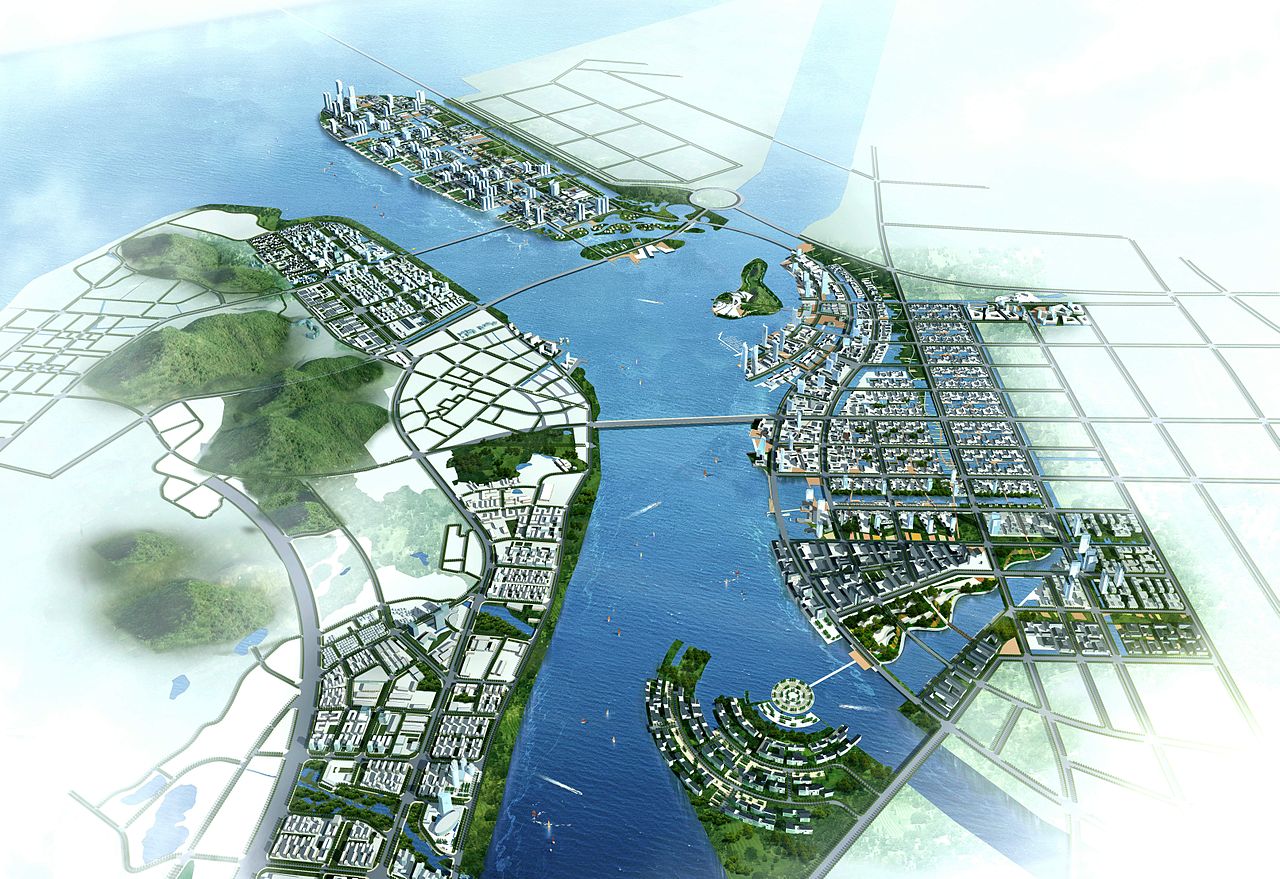 The Internet of Things (IoT) has been committing a lot of buzzword imperialism lately. It’s a hot term, marching across the technological countryside and looking for rich disciplines to capture. Electronics, manufacturing, and robotics, among others, have all become dominions of the IoT. The result is that the meaning of IoT has broadened to include practically anything that involves 1. technology, and 2. something physical.

At the same time, practitioners have been trying to escape the IoT — and its early association with Internet-connected refrigerators — for years. Big enterprises that want to develop serious applications for the Internet of Things have come up with other terms for what they’re doing, like Internet of Everything (Cisco) and Industrial Internet (GE).

Let’s put a stop to this and define some boundaries. In my view, the Internet of Things is the result of a much larger and more important movement that’s about making the physical environment accessible in the same way that the Internet has become accessible over the last 20 years. I’ll call this the “new hardware movement.”

Hardware development is becoming an agile discipline, and is starting to look much more like software development. This is partly because new tools — prototyping, supply chain, and marketing — have made it easier to develop and ship hardware flexibly and on short timelines. It’s also happening because computing is available at low cost in many places where it wasn’t before, and this has made it possible to solve problems in software that previously would have been solved, expensively and inflexibly, in hardware. (You’ll see all of these represented in the pop-up factory at Solid.)

So, hardware can be deployed in all sorts of ways that it couldn’t before, and at much lower cost. That means computing can extend into many places where it couldn’t before — like cornfields and streetlights. As it gets easier to deploy, intelligent hardware will find its way into practically every business — in the same way that going from mainframes to PCs made computing a feasible component of every business, and the Web made it possible to put every business on the Internet.

At the same time, the Internet of Things has emerged as the business imperative that follows big data. Data science has already revolutionized every industry that touches the Internet. The Internet of Things promises to “Internetize” more industries and enable them to adopt the disciplined, data-driven business models that their Web-enabled counterparts have already built.

Where this way of doing business has been available only to fields like advertising, finance, and online retail, it is now becoming available to industries that operate in the physical environment: logistics, agriculture, heavy industry, healthcare, mining, etc.

The Internet of Things and the new hardware movement are not the same thing.

The new hardware movement is driven by new tools for:

The IoT is driven by:

For the most part, the new hardware movement is an enabler and driver of the Internet of Things, making it possible to develop IoT systems quickly and at low cost. As Joi Ito wrote:

Internet of Things is a big deal, but rather as a symptom of a general trend of moving innovation to the edges, to the entrepreneurs, to the developing world — to a much more democratic system.

There are plenty of “new hardware” ideas that don’t overlap with the IoT: developing a 3D printer, for instance, doesn’t depend on connectivity and remote data processing in any significant way; on-board microcontrollers, smartphone-derived electronic components, and flexible manufacturing are the key enablers.

I’d argue that there are also IoT ideas that don’t follow directly from the new hardware movement. Many applications in heavy industry, for instance, don’t rely on agile hardware development but do make heavy use of connectivity and data processing. 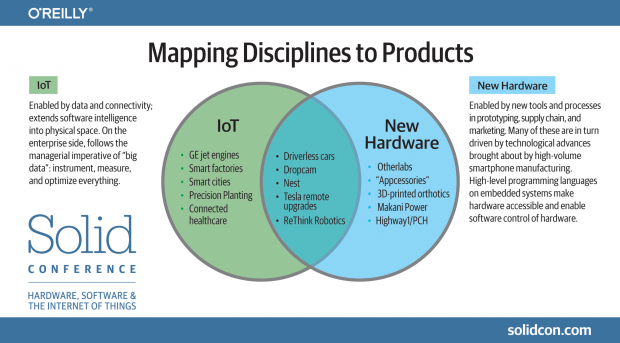 Recent shifts in the hardware development process have made familiarity with the entire process possible and even essential, in much the same way that a good Web developer can understand something about the “full stack” from databases and back-end software to front-end scripting and markup.

The software side, in particular, has become much more accessible and has opened a beachhead to hardware. Because it’s now possible to program embedded systems with high-level interpreted programming languages like Python and JavaScript, the number of people who can approach hardware has increased dramatically to include many software developers who have little or no hardware experience.

Solid covers topics that exist in the overlap between the new hardware movement and the Internet of Things, as well as topics from each side. We focus slightly more on the hardware side, though, because it is on this side that practitioners identify themselves and see tools that they need to learn. Technical skills include industrial design, prototyping, electrical and mechanical engineering, design for manufacture, embedded-systems programming, and network engineering.

Essential business topics in hardware include supply chain management and hardware marketing, which differs dramatically from software marketing. All of these disciplines are important in applications that call themselves IoT (for instance, developing a connected thermostat) as well as those that do not (like creating a desktop CNC machine or a 3D printer).

There are fewer IoT disciplines that stand apart from what practitioners would include under the hardware label: data analysis, machine learning, and platform design are the essential ones.

Critically, each of the hardware disciplines above is attached to an identifiable practitioner label: electrical engineer, industrial designer, DfM engineer, embedded systems developer, etc. All of them roll up to “I’m a hardware engineer” or “I’m a software engineer who works on hardware.” The IoT disciplines are also attached to practitioner labels, but they rarely roll up into an identification like “I’m an IoT engineer.”

Solid covers everything of interest to the executive, entrepreneur, or engineer who needs to understand how the hardware stack is emerging and developing: we include practical sessions on design, prototyping, manufacturing, electrical engineering, security, the analysis of machine data, and hardware as a business — both startup and enterprise. In more far-sighted sessions, we cover next-generation materials, interfaces, and tools, and for the first time we’re including synthetic biology, which Joi (among others) has identified as the next discipline of interest to forward-looking technologists.

To the degree that there is a discipline emerging here, it’s a broad one whose stack consists of many hardware and software disciplines that have historically stood alone at much more distance than, say, database development and front-end Web programming. I’ve written about the stack before, but you can see here how it emerges in the Solid conference program:

The premise beneath both of them is ultimately one of accessibility: it’s getting easier to start working on hardware, and the Internet of Things will eventually be as open to the contributions of the world as the regular Internet is today.