Get full access to Droid 2: The Missing Manual and 60K+ other titles, with free 10-day trial of O'Reilly.

The Droid 2 does a great job of playing and managing music, so much so that you may no longer feel the need to carry around another music player. It includes an excellent built-in music player and manager, and a 3.5 mm headset stereo jack that you can connect to headphones or external speakers. Read this chapter and get ready to plug in and turn up the volume. 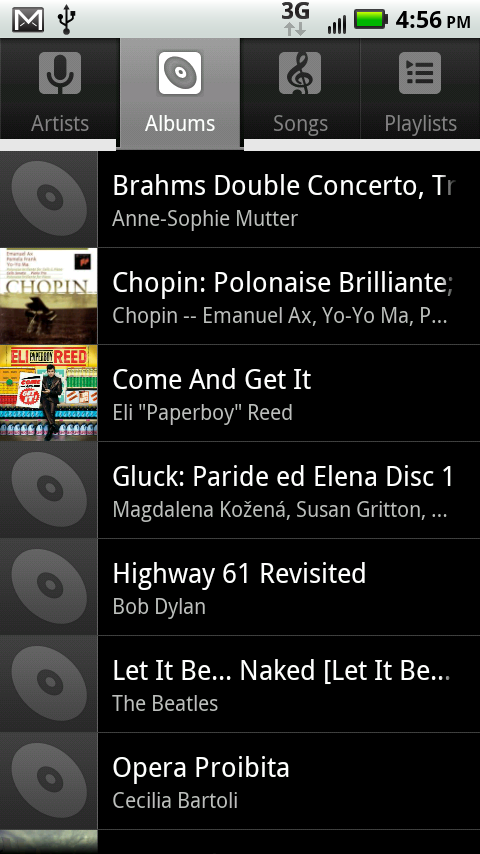 Where to Get Music

Before you play music, of course, you first need to get it onto your Droid 2. The best way to do that is to transfer music from your PC or Mac to your Droid 2 using Windows Media Player. For details about how to do that, turn to Chapter 12. 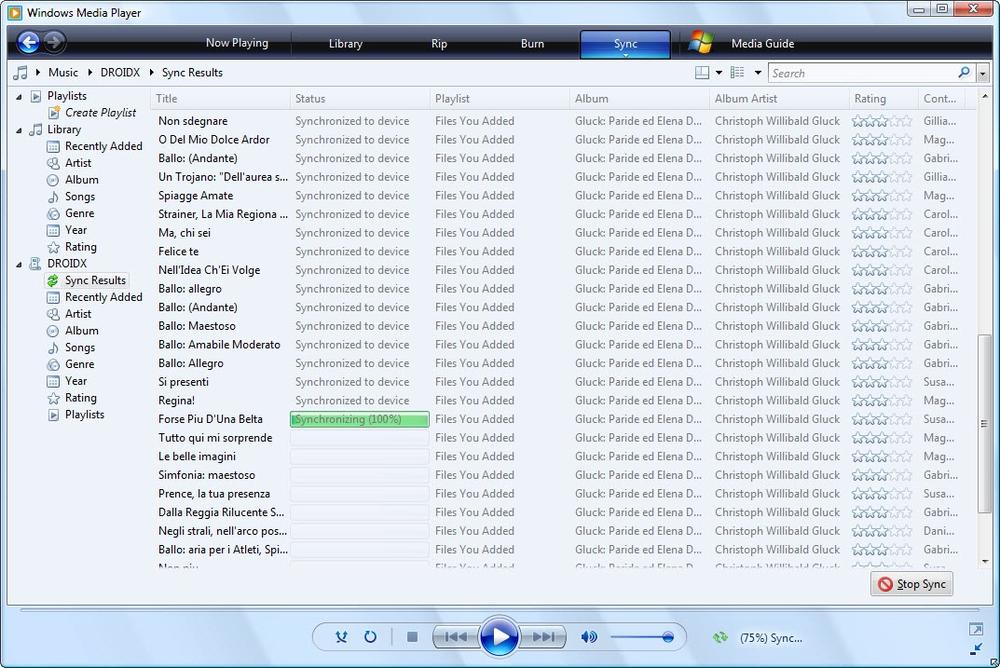 You can also buy or download music via Droid 2 apps, such as the Amazon MP3 app that comes with the Droid 2. Tap the Amazon MP3 icon from the Application Tray to run the app. You’ll need to have an Amazon account to pay for and download music, so set one up first if you want to use the app. 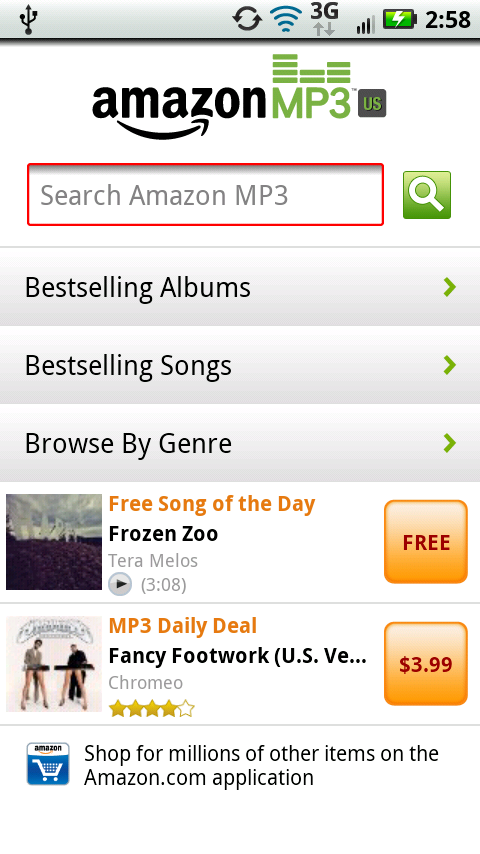 If you tap a download link on a web page for an MP3 file in the Droid 2 browser, the file doesn’t download to your Droid 2’s SD card. Instead, the Droid 2 plays the music file, but doesn’t add it to your collection.

You play and manage your music using the Droid 2’s Music app. Tap the Music icon in the Application Tray to launch it. The app organizes your music by four lists, through which you scroll like all other scrollable lists on the Droid 2: 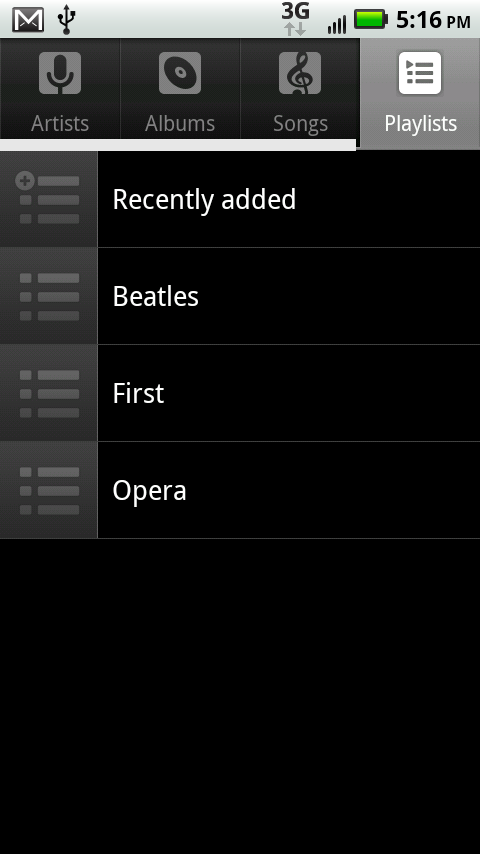 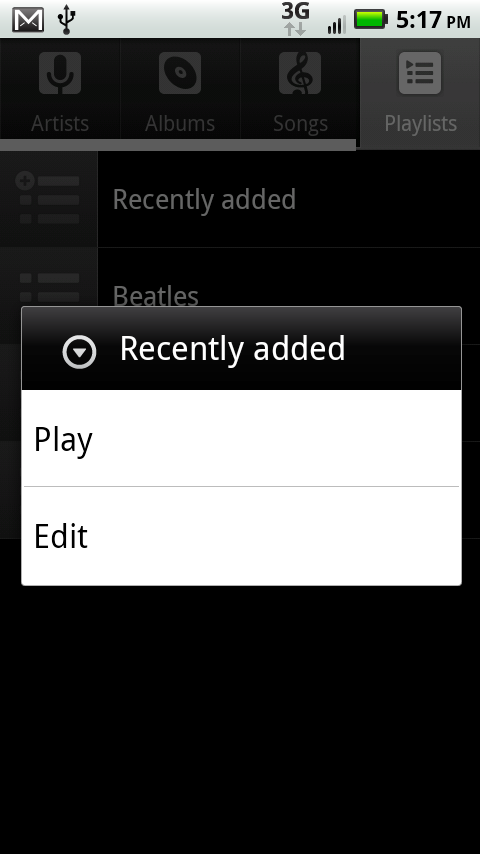 Choosing from the 3D Gallery

Choosing music from a list works just fine, but it’s not very exciting. The Droid 2’s 3D Gallery makes choosing an album as visual and intuitive as flipping through a rack of colorful CD covers. When you’re in the Albums list, simply rotate the phone 90 degrees, and the screen flips to a horizontal view. You see all your album covers in what appears to be three-dimensional space. Scroll and flick through them, and they move into focus and recede in turn. Tap an album cover to see and play the album’s songs. 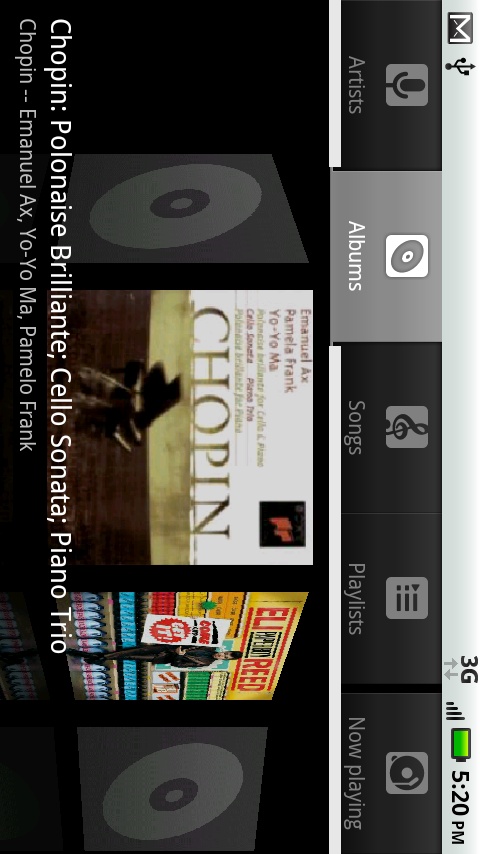 Tap a song to play it, and a screen appears loaded with information, and all kinds of controls and widgets. 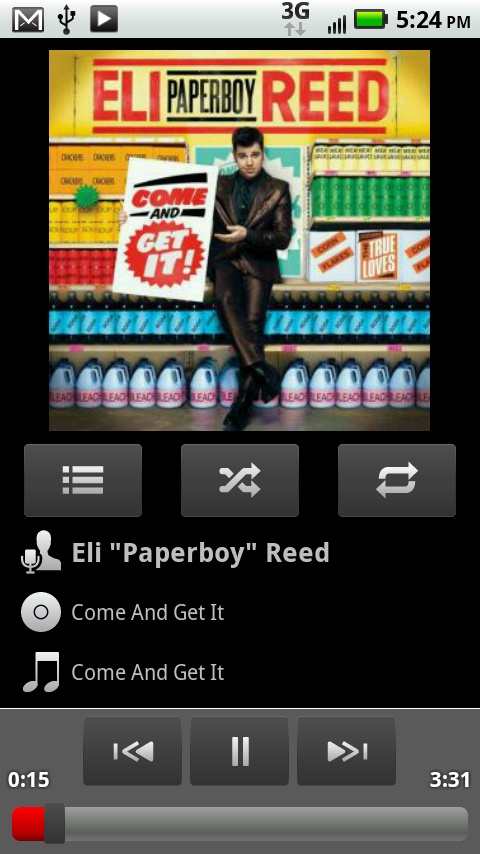 Among other controls, you’ll find: 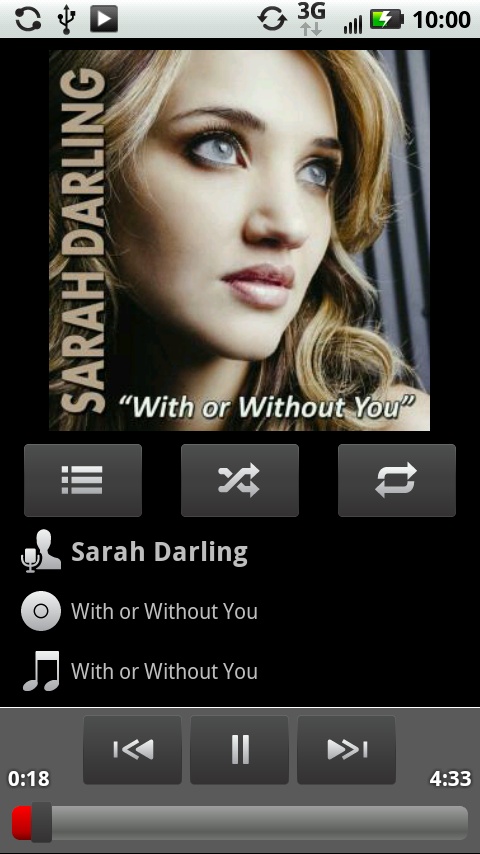 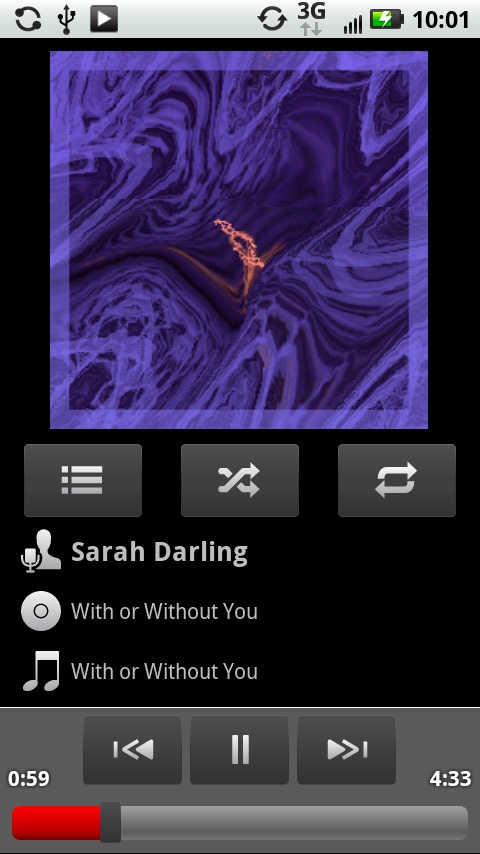 Hold your finger on the visualization, and you get to choose from many different types. Just tap the type you want to use.

When you transfer music from your PC or Mac to your Droid 2 using Windows Media Player, you also transfer over your playlists. But you’re not dependent on that to create playlists—you can also create and edit them from your Droid 2.

To do so, hold your finger on a song, artist, or album, and from the screen that appears, tap “Add to playlist”. A new screen appears. To add the song to your current playlist or an existing playlist, tap the appropriate button. To create a new playlist and add this song to it, tap New, type a name for the playlist, and then tap Save. The playlist is created with the song, album, or all of the artist’s songs on it. The playlist then appears in the Playlist area. 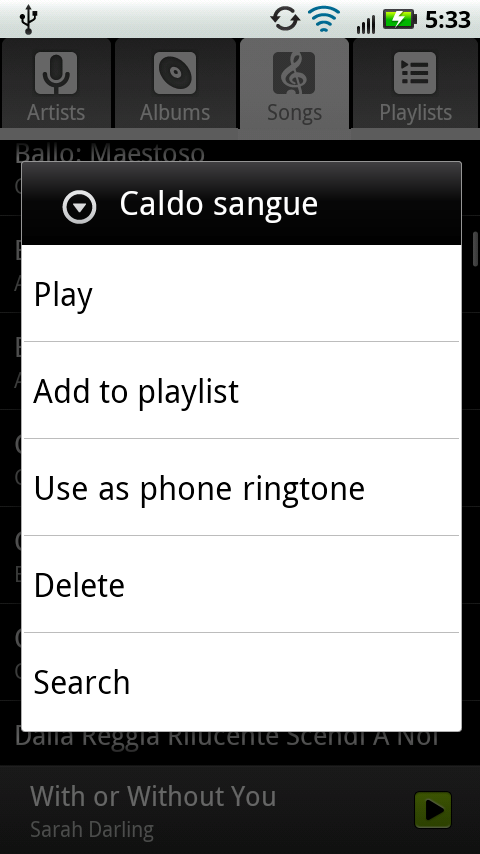 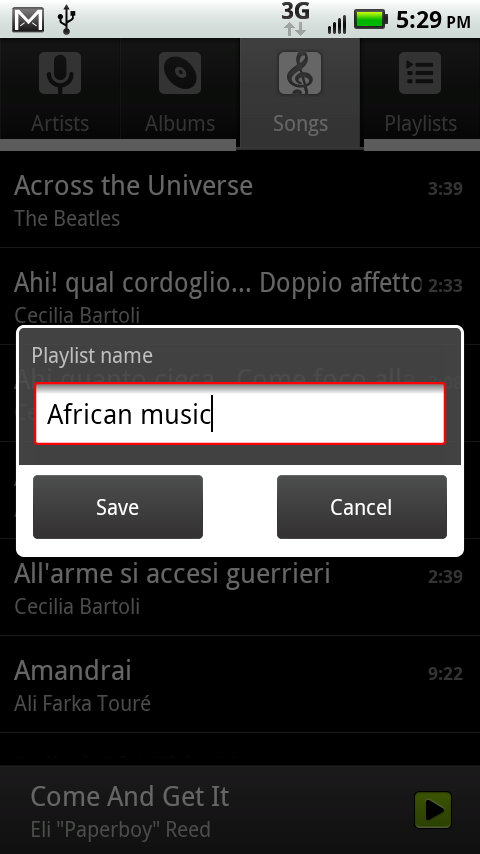 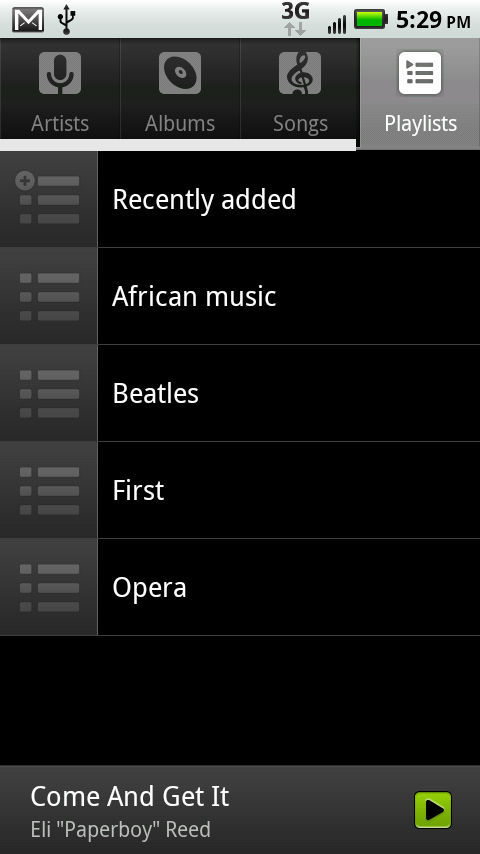 Once you’ve created a playlist, you have the following ways to edit it:

If you’re displaying a list of songs in an area other than the playlist area—for example, in the Songs or Albums listings—when you hold your finger on the song, the “Remove from playlist” option doesn’t appear.

Even if you haven’t imported or created any playlists, the Droid 2 creates one automatically for you—“Recently added”. As the name says, that’s a list of all the music you’ve most recently added to your Droid 2. The “Recently added” playlist can get extremely long if you often add music, so you can change the length of time the Droid 2 uses to compile the playlist. Press and hold the playlist and then tap Edit. Use the slider to select any time period from 1 week to 12 weeks, and then tap Done. 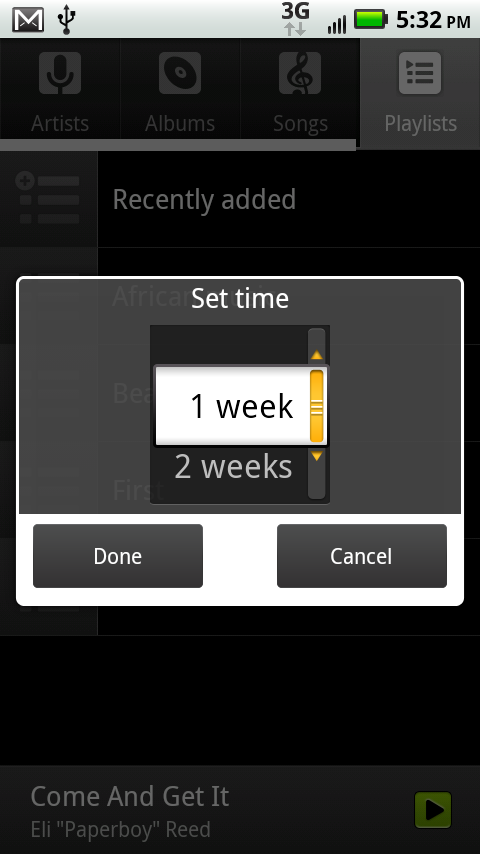 You can’t remove individual songs from the “Recently added” playlist.

The Droid 2’s Music app gives you plenty of options that aren’t immediately obvious. The best way to find them all is to press the Menu key wherever you are—whether you’re playing a song or browsing the library in the Artists, Albums, Songs, or Playlists areas. When you press the Menu key, a menu pops up at the bottom of the screen with some combination of these options: 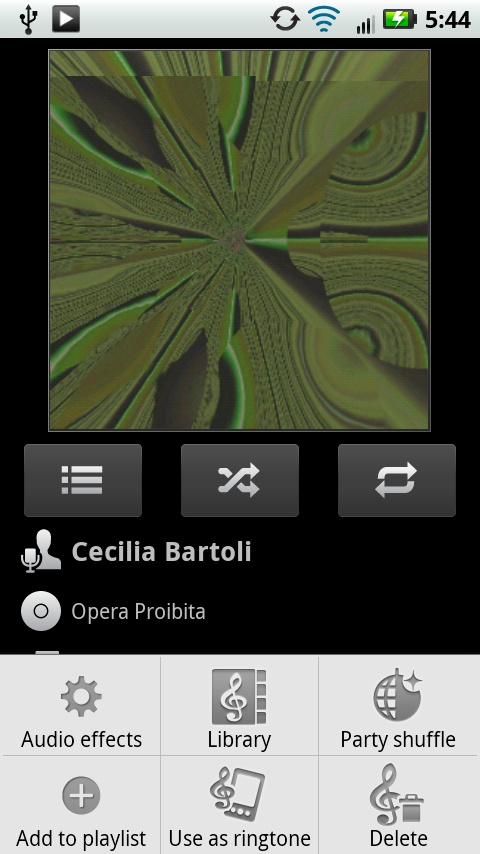 The Droid 2 can’t play DRM-protected music purchased on another device and then transferred to the Droid 2. DRM stands for digital rights management, and it’s a technique used to limit the distribution of for-pay music files. So if you transfer a DRM-protected file to your Droid 2, it won’t play. 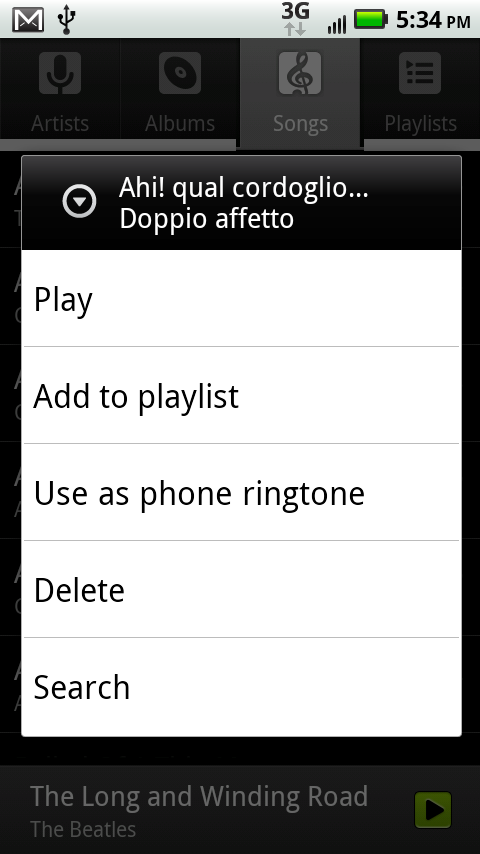 You can also play music by using your Droid 2 as an FM radio, or by using an app that streams music wirelessly to your Droid 2. To use your Droid 2 as an FM radio, tap the FM Radio icon in the Application Tray, and you’ll run the Droid 2’s built-in radio tuner. There are many apps that play streaming music to your Droid 2, but everyone seems to love Pandora. Find it by searching for Pandora in the Market (Using Market). If you already have a Pandora account that you use to play music from the Web, all your stations will already be set up when you use the Droid 2’s Pandora app.

Using Your Droid 2 While Playing Music

Because the Droid 2 is built for multitasking, you can play music even when you’re doing something else with your Droid. Open the Music app, start the music, and then feel free to use other apps and features. The music keeps playing. While music is playing, a small button appears in the Notification bar

. Drag down the Notification bar and tap the song playing, and you’ll be sent back to the Music app. 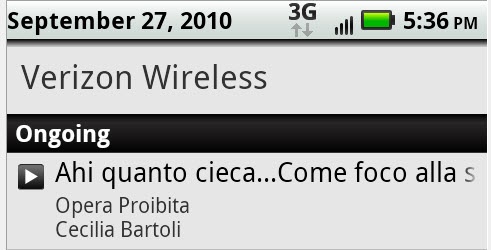 Even when your phone is locked, you can still listen to music and control the music player. If you were listening to music before the Droid 2 locked itself, it keeps playing.

Wake up the Droid 2 (Location & Security), and you can see the player’s controls even though the phone remains locked. You can pause and play music as well as skip to the next song or go back to a previous song. 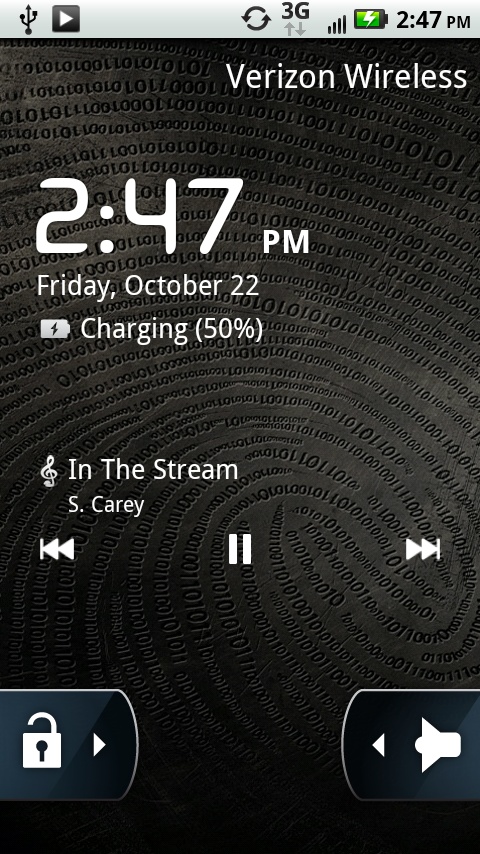 Playing Music and Media on Other Devices

The Droid 2 lets you share, view, and play music, videos, and photos using a standard called DLNA, short for Digital Living Network Alliance. The Droid 2 is DLNA compliant, which means that it can share media with other DLNA devices, such as TVs, computers, and mobile devices. When you buy a device, look in the documentation to see if it’s also DLNA compliant. You can also look for this logo on packaging or documentation:

If you’re not sure whether you have a device that’s DLNA compliant, go to www.dlna.org. In addition to finding out more information about DLNA, you can do a search for your device and see if it’s a DLNA one.

Here’s just some of what you can do with your Droid 2 and other DLNA devices:

There are more possibilities and permutations with your Droid 2 and DLNA; this section can’t cover them all. Set up your Droid 2 as described in this section, and then follow the information that appears onscreen.

To do any DLNA magic, your Droid 2 needs to be connected to a network or a DLNA device—which means a Wi-Fi connection or a USB cable connection. In fact, when you connect to a Wi-Fi hotspot, or connect your Droid 2 to a computer, you may see this icon

in the Notification bar. Pull it down, and you’ll see that there’s a DLNA device somewhere near you. 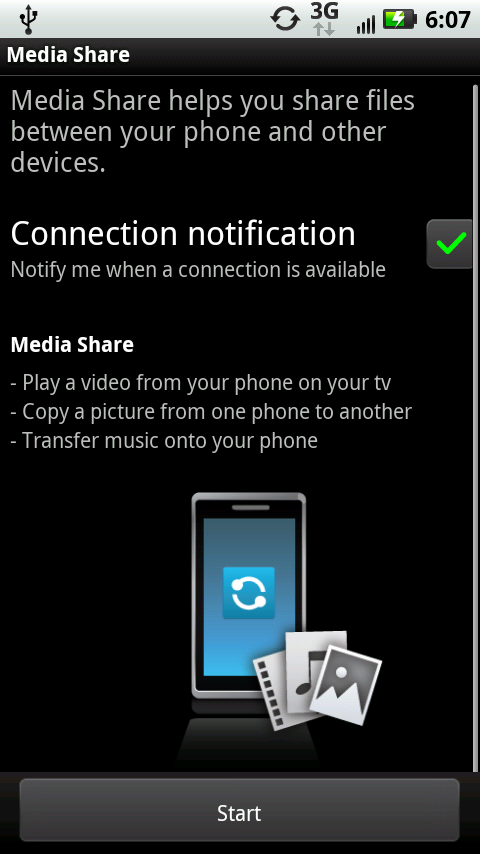 To begin setup, tap Start. If you don’t want to get notifications in the future when you connect to a Wi-Fi network or a computer, then turn off the checkbox next to “Connection notification”.

From the screen that appears, select the kind of device you want to connect to your phone, including a computer, a network drive for accessing files such as a home media server, a phone, a TV, or a video game console.

Once you select a device, you then choose how you want to share files. If you choose a computer, for example, you can share, sync, or copy files to the Droid, or play the Droid’s videos and music on the computer. If you choose a TV, you can play or share music, videos, or photos on its nice big screen. 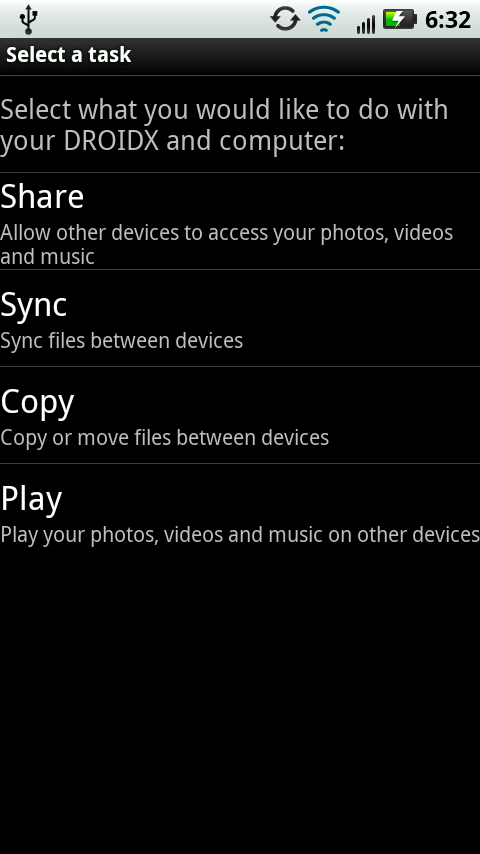 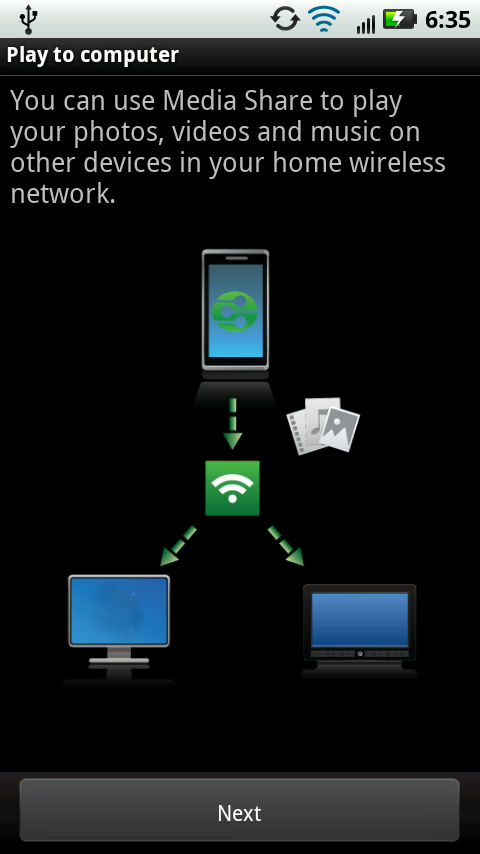 There’s another app you can use on your Droid 2 to play media from another DLNA device—the DLNA app. It serves much the same purpose as the Media Share app. To get started, tap the DLNA icon in the Application Tray, and then follow the instructions. You’ll likely find Media Share simpler to use, but you may want to give the DLNA app a try to see how you like it.

Get Droid 2: The Missing Manual now with the O’Reilly learning platform.