Get full access to eBay Hacks, 2nd Edition and 60K+ other titles, with free 10-day trial of O'Reilly.

On eBay, research is money. A seller who knows how much an item is worth will be able to choose the selling options more appropriately, and as a result, get more money. And a buyer who knows the worth of an item will more readily recognize a good deal and as a result, spend less money. Fortunately, there are tools at your disposal to help determine an item’s worth in about 20 seconds flat.

Any item on eBay is worth only what someone is willing to pay for it. Fortunately, for almost every item sold on eBay, an identical or similar item will have been sold within the last month or two. And given the public nature of eBay’s past auctions, it’s easy to find out the health of the current market for your item before you list it.

Start with a standard search (see Chapter 2), and locate any auctions for items similar to the one you’re selling. Click "Completed listings” in the Display box as shown in Figure 4-1, and then select “highest first” to sort the listing by final price in descending order. Note that eBay’s Completed Listings search is a title only search (descriptions of closed auctions aren’t indexed), so you’ll typically want to use simpler (broader) search queries than you’d use for active items. 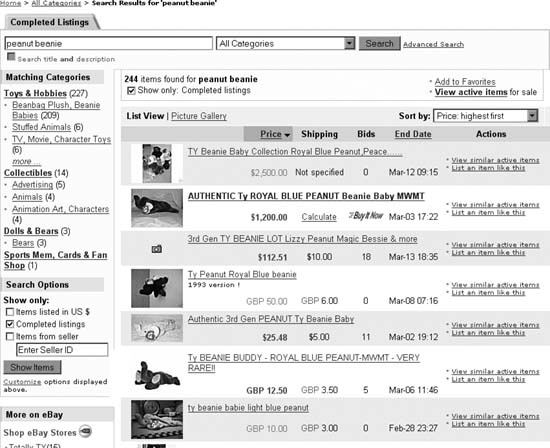 Figure 4-1. A quick search through recently completed auctions, sorted by price, gives you a good idea what your item is worth

Only the closing price of a successfully completed auction matters, so pay attention only to auctions that have received at least one bid. Even if the seller had a reserve that wasn’t met [Hack #45] , the closing price will give you a picture of what buyers might be willing to bid for your item.

Completed auction listings are goldmines of information, and not just for finding closing prices. For example, you can find out how the top-selling completed auctions have been categorized [Hack #12] and titled [Hack #42] and build on past sellers’ experiences. And if you’re really determined, you can even track running auctions [Hack #29] for items similar to those you’re selling, so you can see first hand when the market is good and when it’s not.

It’s important to realize that some markets will be more stable than others. For example, there’s always an extremely healthy interest in laptops, PDAs, digital cameras, and other popular consumer electronics, especially since there are retail stores to help set prices. But markets for collectibles are typically more volatile, since the value of a given item is influenced more by its rarity and the people who happen to be visiting eBay that week than by the item’s original price or its quoted value in some collector’s handbook.

An item’s perceived value is the most important factor in its market value. If you’re selling a rare antique toy, and yours is the only one like it on eBay, then it will likely fetch a fortune. But during a week in which several examples of a supposedly rare item are being sold, its perceived value will be lower. If your research shows that the market for your item appears to have bottomed out, it usually pays to wait two or three weeks until those items currently on eBay have been sold off, and anew batch of hungry buyers makes their way to the auction block.

When you see a rare item getting a lot of bids on eBay and you have one just like it to sell, it’s best to wait until the other auction ends before listing yours. Otherwise, you’ll undermine the perceived value of your item by flooding the market and end up splitting bids with the other seller. Plus, if you time it [Hack #48] so that your item appears in search results within a few hours of the close of the other auction, you’ll be the happy recipient of bids from the hungry eBayers disappointed at losing the other seller’s auction.

Inexperienced sellers often make the mistake of setting the starting bid of an auction equal to the amount they expect—or hope—to get for their item. Other sellers forgo research and set the starting bid at a single dollar, relying on the market to set the price. Of the two, the second approach is the better choice for the lazy seller, because you’re virtually guaranteed to sell your item.

The key is to remember the empty-restaurant syndrome. When strolling down the street looking for a good restaurant, are you more likely to enter an empty restaurant or a crowded one? If you’re like most people, you’ll go for the crowded restaurant, even if there’s a wait.

Bidders on eBay think the same way. Consider two auctions for the same item, one starting at $20 and the other starting at $300. Assuming the market value of the item is at least $300, the first auction may receive 20 bids and close at $330 while the second may get only two bids and close at a measly $305. Why? Not only will the lower-priced auction attract more bidders early on and appear higher in search results sorted by price, its perceived popularity will buoy its perceived value toward the end of the auction.

The biggest mental block most sellers have when choosing a low starting price is the fear that the item will sell with too low a final price. But if you take the time to research the market for your item beforeyou list it on eBay, you’ll know how much money it will fetch even before the first bid is placed. Among other things, this means that if you find that the market for your item is weak, you can choose not to list it at all. Of course, you can always use a reserve price [Hack #45] to protect yourself, but that approach has drawbacks as well.

So, by that logic, should you start all your auctions at a single penny? Of course not. Instead, you’ll want to temper this approach with the following concepts:

When selling an item of limited appeal—when you might expect only one or two bidders to be interested—you’ll want to set your opening bid much higher. Remember, if your starting bid is $5 and you get only a single bidder, the closing price will be $5, even if the buyer entered a maximum bid of $150.

Use Buy It Now.

Use the Buy It Now listing upgrade [Hack #46] to set two prices for your auction: the artificially low starting bid price, and the full amount you’d like to get for your item. Hint: an especially eager bidder might be willing to pay a few extra dollars to get the item sooner.

Another workaround—which is not recommended—is to state your Buy It Now price in the auction description, instructing bidders to contact you directly if they’re interested. Not only does this violate eBay policy, but it may also appear to bidders that you’re trying to scam them [Hack #25] .

Of course, if you choose your Buy It Now price wisely, the need to keep it from disappearing won’t be much of an issue.

eBay’s listing fees are based on the starting bid you choose: the lower the starting bid, the lower the cost to list. Fees are not calculated proportionally, however, but rather according to a tiered pricing structure. For example, a fixed fee of 30 cents is charged for all auctions under $10, which is why you see so many auctions starting at $9.99. The next cut-off is $25, so $24.99 is also a common starting price. Note that it rarely pays to use a lower starting bid just to save a few cents on eBay fees, however. Go to pages.ebay.com/help/sell/fees.html for descriptions of all current fees.

Be a little devious.

Setting a starting bid of $1.00 or even $0.01 is a clear sign to the more experienced bidders that you expect heavy bidding for your item, and some bidders might pass it up as a result. Instead, a slightly higher, arbitrary starting bid like $20 might be a better choice. This is low enough to encourage healthy bidding, but looks like a starting bid entered by someone who doesn’t know what he’s selling. Auctions like these tend to catch the attention of advanced eBay members who will wait until the end of the auction to bid [Hack #26] .

If nothing else, these examples illustrate why it’s so important to know the market value of your item before you sell.