After you’ve connected and turned on your camcorder, open iMovie by double-clicking its icon, or single-clicking it in the Dock. But before you’re treated to the main iMovie screen (shown in Figure 4-4), iMovie may ask you to take care of a few housekeeping details.

All modern Mac monitors let you adjust the resolution, which is a measurement of how much it can show as measured in pixels (the tiny dots that make up the screen picture). If you choose

iMovie likes a very big screen—a high-resolution monitor. If your monitor is set to one of the lower resolution settings when you launch iMovie, you’ll get an error message like the one shown in Figure 4-2. The bottom line: Choose a setting that’s 1024 x 768 or larger. Poor iMovie can’t even run at a lower setting.

If you switch your resolution to a resolution lower than 1024 x 768 while iMovie is open, the program has no choice but to quit. (At least it does you the courtesy of offering to save the changes to the project file you’ve been working on.) The program is more graceful when you switch between two higher resolutions; it instantly adjusts its various windows and controls to fit the resized screen. In other words, whenever you switch resolutions while the program is open, be extra careful not to choose, for example, 800 x 600 by mistake.

If everything has gone well, and iMovie approves of your monitor setting, your next stop is the window shown in Figure 4-3.

You’ve reached a decision point: You must now tell the program whether you want to begin a new movie (called a project in iMovie lingo), open one you’ve already started, use the Magic iMovie feature (Section 4.8), or quit the program.

After the first time you run iMovie, you may not see the dialog box shown in Figure 4-3 very often. After that, each time you launch iMovie, it automatically opens up the movie you were working on most recently. If you ever want to see the Project dialog box again, in fact, you’ll have to do one of the following: 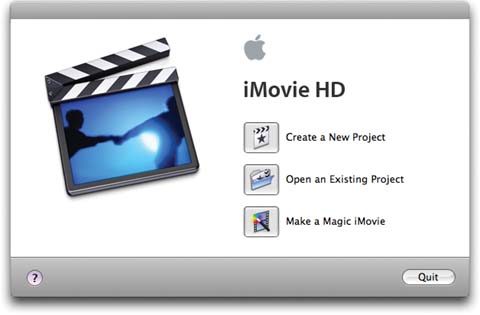 Figure 4-3. Click Create New Project to begin working on a new movie, Open Existing Project to open an existing movie, Magic iMovie to let the program assemble a movie unattended, or Quit to back out of the whole thing. The little ? button opens up the iMovie HD Help system.

UP TO SPEEDThe iMovie Tutorial

iMovie no longer comes with a sample project that you’re supposed to build as you learn the ropes; the kids-washinga-a-dog movie is long gone.

In its place, Apple offers a choice of two very helpful learning kits.

First, your copy of iMovie comes with a 47-page PDF file (Acrobat Reader file) that can serve as a starting point for your iMovie education. To open it, choose Help → iMovie HD Help from within iMovie, and then click the Getting Started link. After a moment, the PDF document opens up on the screen, so that you can print it or read it electronically.

Second, Apple has provided a series of basic but helpfully narrated videos that walk you through the entire core of iMovie. They’re online, but the quickest way to find them is to choose Help → Service and Support from within iMovie. You’re taken to the main iMovie help page online, which contains links to the tutorials like the one shown here. 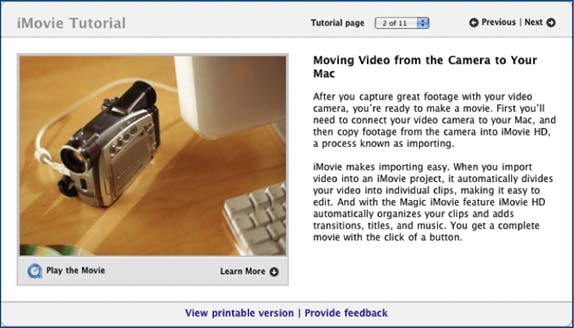 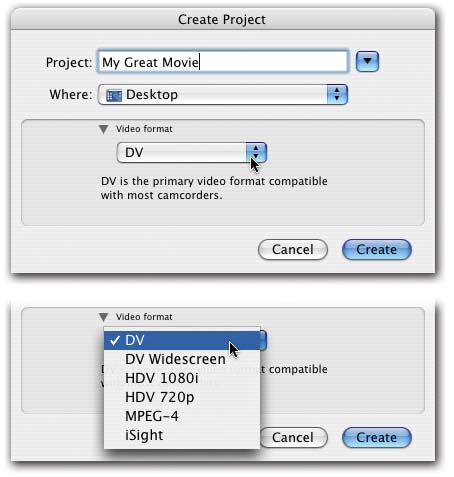 Figure 4-4. Top: In the Create Project dialog box, you name your new movie and specify where you want to save it. Bottom: You can also tell iMovie what format to expect for the incoming video. In most cases, though, you don’t need to bother; iMovie automatically accommodates whatever camera you attach.

This is a critical moment. Starting a new iMovie project isn’t as casual an affair as starting a new word processing file. For one thing, iMovie requires that you save and name your file before you’ve actually done any work. For another, you can’t bring in footage from your camcorder without first naming and saving a project file.

Above all, the location of your saved project file—your choice of hard drive to save it on—is important. Digital video files are enormous. Standard DV footage consumes about 3.6 MB of your hard drive per second. Therefore:

As you could probably guess, high-definition footage is even more massive; each minute of it takes between three and four times as much disk space as standard DV footage.

When you save and name your project, you’re also telling iMovie where to put these enormous, disk-guzzling files. If, like most people, you have only one hard drive, the one built into your Mac, fine. Make as much empty room as you can, and proceed with your video-editing career.

But many iMovie fans have more than one hard drive. They may have decided to invest in a larger hard drive, as described in the box in Section 4.4, so that they can make longer movies. If you’re among them, save your new project onto the larger hard drive if you want to take advantage of its extra space.

People who have used other space-intensive software, such as Photoshop and Final Cut Pro, are frequently confused by iMovie. They expect the program to have a Scratch Disk command that lets them specify where (on which hard drive) they want their work files stored while they’re working.

As you now know, iMovie has no such command. You choose your scratch disk (the hard drive onto which you save your project) on a movie-by-movie basis.

Note, by the way, that digital video requires a fast hard drive. Therefore, make no attempt to save your project file onto a CD, DVD, iDisk, or another disk on the network. It won’t be fast enough, and you’ll get nothing but error messages.

As shown in Figure 4-4, iMovie offers a pop-up menu in the Create Project dialog box called “Video format.” (You may have to click the little flippy-triangle button to see it.) The most important lesson to learn about this pop-up menu is that, in general, you should ignore it.

Here, you can specify what kind of incoming video iMovie should expect, but you don’t have to. iMovie detects what kind of camcorder you’ve attached automatically, and it creates the right kind of project no matter what this pop-up menu says.

iMovie can even change the project’s format after you’ve created it, but only if the project is completely empty. Once you’ve created a clip—even an empty black clip or a Ken Burns photo clip—the format is locked down. Of course, even then, you can delete all the clips and empty the iMovie Trash; at that point, iMovie will once again resize its own window according to the kind of camcorder you plug into it.

So why did Apple provide this pop-up menu? Primarily for situations in which you’re not going to use a video camera to provide the footage. For example, you might want to use iMovie HD to create a spectacular slideshow from your digital photos in high-definition, or at least in widescreen. (As of mid-2006, there’s no such thing as a Mac that burns high-definition DVDs. But there will be soon. If you create your slideshows in high-def format today, you’ll be ready.)

In such cases, you’ll be happy to have this pop-up menu so that you can choose a format manually.

Once you’ve set up your Create Project dialog box, click the Create button.

Once you’ve saved your file, you finally arrive at the main iMovie window. Figure 4-5 is a cheat sheet for iMovie’s various screen elements. Spend no time memorizing their functions now; the rest of this book covers each of these tools in context and in depth.