Nobody disputes that music, titles, and crossfades make movies look a heck of a lot better. But let’s face it: Millions of people wind up taking camcorder movies, and then never looking at them again. Editing and spicing up those movies is great, but it’s work. And it takes a lot of time.

In an effort to solve that problem, iMovie HD offers something called the Magic iMovie—a completely automated movie-assembly feature. You literally connect the camcorder, choose File → Make a Magic iMovie, choose the music and options you want, and then walk away. Without any further attention from you, the program rewinds the tape, creates an opening title, imports all the footage, adds transitions between shots, backs it all up with music that you choose (at a volume level you specify), and, if you like, hands off the result to iDVD for quick burning to disc, complete with scene-selection buttons for easy navigation.

Magic iMovie is ideal, in other words, in situations like these:

Magic iMovie is, however, a fairly limited tool. It was designed to automate things for you, which means that it doesn’t give you a lot of options. Here are some things you should be aware of:

Now that you understand what to expect from Magic iMovie, here’s how it works:

You can stop the importing process before Magic iMovie reaches the end of the designated period (or the end of the tape) by turning off the camcorder at that spot.

Each individual step of this process takes just as long as if you did it manually. iMovie must still import the video in real time, render (process) every transition, and so on. 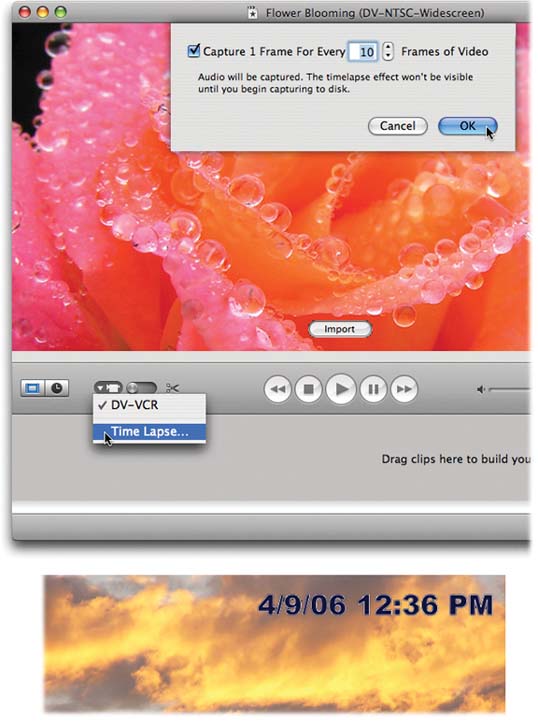 Figure 4-13. The new Time Lapse feature is great for capturing nature’s most dazzling—but most boring-to-watch—displays, like clouds passing, flowers blooming, or Microsoft coming out with a new version of Windows.When you turn on the feature (lower left), you’re offered the opportunity to specify how much time compression you want (top).Note that iMovie does not, in fact, record audio in time-lapse mode if you’re recording live from an iSight camera or a high-def. You do get sped-up audio if you’re importing from a DV tape.Bottom: When you’re recording into an iSight-formatted project, you can opt to have a date and time stamp embedded into the captured video—a great technique for security videos, science experiments, and other informational projects.The box on the next page has details.

The beauty of this method, though, is that you don’t have to be there. You can be working in another program, or even another part of the house, as iMovie chugs away unattended. (Then again, if you’re a first-time iMovie maker, sticking around to watch the process may help to give you an idea of how the general iMovie workflow goes.)

If you really think about it, the new Time Lapse option was born for the iSight camera. Here, after all, is a video camera with no tape to run out, and no battery to run dry (assuming your Mac is plugged in). You could use this setup to capture days’ worth of footage, for scientific, documentary, security, or fun purposes.

For starters, iMovie offers to stamp the time and date onto the video, as shown in Figure 4-13. The pop-up menus let you choose the size of type and where it should appear on the video (which corner of the frame).

If you want to change how the time and date stamps appear—U.S. vs. European style, , for example—choose

Now, a warning: this time stamp becomes a permanent part of the footage. It’s not like an iMovie title, whose font, color, and position you can adjust later.

But what if you want to fiddle with the font, color, and other parameters? If you’re technically brave and promise not to blame Apple if something goes wrong, here’s how.

First, duplicate the iMovie program in your Applications folder. Call the second one iMovie Doctored, or something.

Search for the text Timelapse-font about half way down the file. By carefully editing the 12 entries there, you can customize the font, color, and size of the time stamp. You’ll see the effect after you save your changes and open the hacked iMovie. (If anything goes wrong, you still have the original version.)

All right—so you’ve read this box and you really wish you could have a timestamp from your camcorder, not just iSight. There is a way—but it’s technical, undocumented, and definitely not endorsed by Apple.

Now a standard DV camcorder will show up even in iSightformat projects, so that you can use the time-stamp options. You’ll encounter glitches—your camcorder may be listed twice, and some frames may be dropped—but at least you’ll get the time stamp!

To turn off this feature, return to Terminal and type the same command, but make the last word no instead of yes. Then press the Enter key. 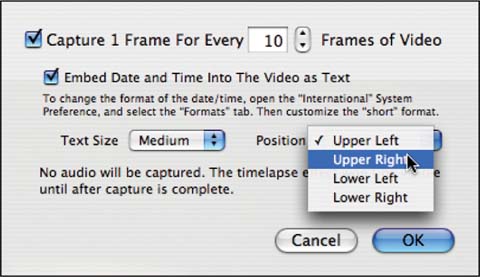 The important thing to remember is that the resulting iMovie project is fully editable; there’s nothing holy about any of the creative decisions that iMovie makes. You can still chop out clips you don’t want, remove or edit some transitions, add or remove chapter markers, and so on.