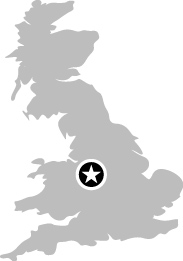 The Anderton Boat Lift is a link between two British waterways that raises and lowers boats 15 meters using a pair of hydraulic rams. It is the oldest working boat lift in the world and was constructed in 1875. The lift was closed in 1983 because of corrosion, but it has has been fully restored to working order and since 2002 has been open to water traffic and visitors.

The lift was constructed by an engineer named Edwin Clark, who went on to build other boat lifts in Europe. His Belgian boat lifts have also recently been restored to operation. A modern boat lift in Scotland opened in 2002 and is also open to visitors (see Chapter 72). But the Anderton Boat Lift is the oldest.

The lift links the River Weaver and the Trent and Mersey Canal. Initially the plan was to build a series of locks to connect the two waterways, but a suitable site could not be found. Also, an enormous amount of water would have been lost operating the locks, because the canal is 15 meters higher than the river. Loss of canal water was also a problem on another canal in England, the Birmingham Canal, where James Watt built a steam engine to pump water back up past a series of locks (see Chapter 78).