Get full access to Deploying OpenStack and 60K+ other titles, with free 10-day trial of O'Reilly.

Nova seeks to provide a framework for the large-scale provisioning and management of virtual compute instances. Similar in functionality and scope to Amazon’s EC2 service, it allows you to create, manage, and destroy virtual servers based on your own system images through a programmable API.

Nova is architected as a distributed application with many components, but the majority of these are custom-written Python daemons of two varieties:

However, there are two essential pieces of the architecture that are neither custom written nor Python-based: the messaging queue and the database. These two components facilitate the asynchronous orchestration of complex tasks through message passing and information sharing. Piecing this all together we get a picture like Figure 4-1. 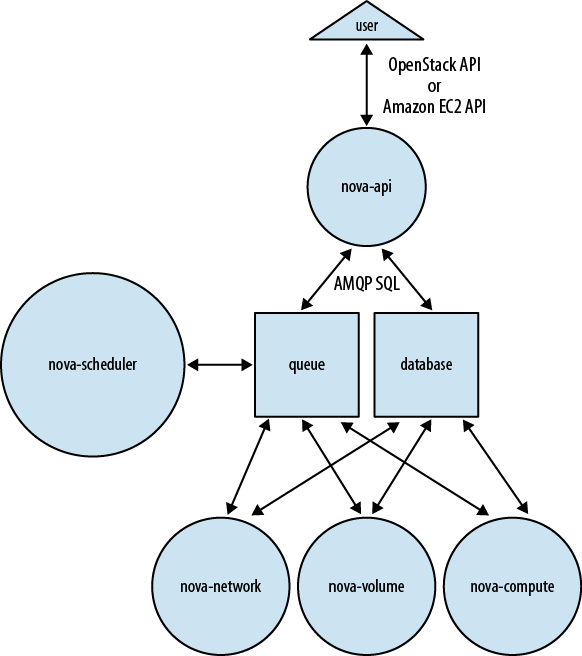 This complicated diagram can be summed up in three sentences:

Now that we’ve seen the overview of the processes and their interactions, let’s take a closer look at each component.

The nova-api daemon is the heart of Nova. You may see it illustrated on many pictures of Nova as API and “Cloud Controller.” While this is partly true, cloud controller is really just a class (specifically the CloudController in nova/api/ec2/cloud.py) within the nova-api daemon. Its primary purpose is to accept and fulfill incoming API requests.

To accept and fulfill API requests, nova-api provides an endpoint for all API queries (accepting requests using either the OpenStack API or the Amazon EC2 API), initiates most of the orchestration activities (such as running an instance), and also enforces some policy (mostly quota checks). For some requests, it will fulfill the entire request itself by querying the database and then returning the answer. For more complicated requests, it will pass messages to other daemons through a combination of writing information to the database and adding messages to the queue.

The nova-scheduler process is conceptually the simplest piece of code in Nova: it takes a virtual machine instance request from the queue and determines where it should run (specifically, which compute server host it should run on). In practice, however, this will grow to be the most complex piece, as it needs to factor in the current state of the entire cloud infrastructure and apply complicated algorithms to ensure efficient usage. To that end, nova-scheduler implements a pluggable architecture that lets you choose (or write) your own algorithm for scheduling. Table 4-1 details the current scheduler choices.

To illustrate how simple nova-scheduler can be, here is the relevant code from the chance scheduler class in nova/schedule/chance.py:

As you can see from above code sample, the schedule method simply chooses a random host from the array of hosts that are currently known to be “up.”

The nova-compute process is primarily a worker daemon that creates and terminates virtual machine instances. The process by which it does so is fairly complex, but the basics are simple: accept actions from the queue and then perform one or a series of virtual machine API calls to carry them out while updating state in the database. An example of this would be nova-compute accepting a message from the queue to create a new instance and then using the libvirt library to start a new KVM instance.

There are a variety of ways that nova-compute manages virtual machines. The most common is through a software package called libvirt. This is a toolkit (API, daemon, and utilities) created by Red Hat to interact with the capabilities of a wide range of Linux virtualization technologies. While libvirt may be the most common, nova-compute also uses the Xen API, vSphere API, Windows Management Interface, and others to support other virtualization technologies.

Virtualization Technology describes some important considerations that should be taken into account when choosing your virtualization technology.

As you can gather by the name, nova-volume manages the creation, attaching, and detaching of persistent volumes to compute instances (similar in functionality to Amazon’s Elastic Block Storage). It can use volumes from a variety of providers such as iSCSI or AoE. Table 4-3 shows the current volume provider options.

The nova-network worker daemon is very similar to nova-compute and nova-volume. It accepts networking tasks from the queue and then performs system commands to manipulate the network (such as setting up bridging interfaces or changing iptables rules).

Nova defines two different types of IP addresses for an instance: Fixed IPs and Floating IPs. These can be broadly thought of as private IPs (fixed) and public IPs (floating). Fixed IPs are assigned on instance startup and remain the same during their entire lifetimes. Floating IPs are dynamically allocated and associated to a domain to allow outside connectivity.

Of these three network managers, VLAN is the most featured, Flat is the most barebones (but flexible), and FlatDHCP strikes a nice balance between the two.

The queue provides a central hub for passing messages between daemons. This is currently implemented with RabbitMQ today, but theoretically could be any AMPQ message queue supported by the Python ampqlib and carrot libraries.

Nova creates several types of message queues to facilitate communication between the various daemons. These include: topics queues, fanout queues, and host queues. Topics queues allow messages to be broadcast to the number of particular class of worker daemons. For example, Nova uses these to pass messages to all (or any) of the compute or volume daemons. This allows Nova to use the first available worker to process the message. Host queues allow Nova to send messages to specific services on specific hosts. For example, Nova often needs to send a message to a specific host’s compute worker to take action on a particular instance. Fanout queues are only currently used for the advertising of the service capabilities to nova-scheduler workers.

Here is an example of the queues created in RabbitMQ for a simple all-in-one node installation:

As you can see from the example, topic, fanout, and host queues have been created for each service (nova-scheduler, nova-compute, nova-volume, nova-network).

The database stores most of the configuration and run-time state for a cloud infrastructure. This includes the instance types that are available for use, instances in use, networks available, and projects. Table 4-4 details all the tables in the current Nova database scheme.

Nova supports a wide range of databases, including popular open-source stalwarts like MySQL and PostgreSQL. For more information on choosing an appropriate database for Nova, see Database.

[2] WSGI is a Python standard specification that defines the communications between web and application servers.

Get Deploying OpenStack now with the O’Reilly learning platform.