Get full access to Learning JavaScript and 60K+ other titles, with free 10-day trial of O'Reilly.

Regular expressions are arrangements of characters that form a pattern that can then be used against strings to find matches, make replacements, or locate specific substrings. Most programming languages support some form of regular expressions, and JavaScript is no exception.

Regular expressions can be created explicitly using the RegExp object, although you can also create one using a literal, as was demonstrated with the string literal in the last section. The following using the explicit option:

While the next line of code demonstrates the literal RegExp option:

In both cases, the plus sign(+) in the search pattern matches anything with one or more consecutive sâs in a string. The forward slashes with the literal, (/+s/), mark that the object being created is a regular expression and not some other type of object.

The RegExp Methods: test and exec

The RegExp object has only two unique methods of interest: test and exec. The test method determines whether a string passed in as a parameter matches with the regular expression. In the following example, the pattern /JavaScript rules/ is tested against the string to see whether a match is found:

Matches are case-sensitive: if the pattern is instead /Javascript rules/, the result is false. To instruct the pattern-matching functions to ignore case, follow the second forward slash of the regular expression with the letter i:

The other flags are g for a global match and m to match over many lines. If using RegExp to generate the regular expression, pass these to the constructor as a second parameter:

In the following snippet of code, the RegExp method, exec, searches for a specific pattern, /JS*/, across the entire string (g), ignoring case (i):

The pattern described in the regular expression is the letter J, followed by any number of Sâs. Since the i flag is used, case is ignored, so the js substring is found. As the g flag is given, the last index is set to the location where the last pattern was found on each successive call, so each call to exec finds the next pattern. In all, the four items found are printed out, and when no others are found, a null value is assigned to the array. This ends the loop.

Typically, books and articles throw all such characters into a table, and then provide a couple of examples where several are used together in a long and complicated pattern, and thatâs the extent of the coverage. Because of this, there are many people who have a lot of trouble putting together regular expressions and, as a consequence, their applications donât work as they originally anticipated. I think that regular expressions are important enough to at least provide several examples, from simple to complex. If you have worked with regular expressions before, you might want to skip this sectionâunless you need the review.

Example 4-5 searches for instances of a space thatâs followed by an asterisk, and replaces them with a dash. Normally, the asterisk is used to match zero or more of the preceding characters in a regular expression, but in this case, we want to treat it as a literal.

The result of applying the regular expression against the string is the following line:

This is a very handy expression to keep in mind. If you want to replace all occurrences of spaces in a string with dashes, regardless of whatâs following the spaces, use the following pattern: /\\s/g in the replace method, passing in the hyphen as the replacement character.

Two patterns of interest are the greedy match (.*) and the lazy star (.*?). In the first, since a period can represent any character, the asterisk matches until the last occurrence of a pattern, rather than the first. If youâre looking for anything within quotes, you might think of using /".*"/. If you use this with a string, such as:

The match begins with the first double-quote and continues until the last one, not the second:

The lazy star forces the match to end on the second occurrence of the double quote, rather than the last:

In Example 4-6, the String search method looks for a date in the format of month name followed by space, day of month, and then year. The date begins after a colon.

Looking more closely at the regular expression, the first character in the pattern is the colon, followed by the backslash with a capital letter D: \\D. This sequence is one way of looking for any nondigit character; the asterisk following means that any number of nondigit characters will match. The next part in the regular expression is a whitespace character \\s, followed by another new pattern: \\d. Unlike the earlier sequence, \\D, the lowercase letter means to match numbers only. The plus sign following it means one or more numbers. Another space follows \\s in the pattern and then another sequence of numbers \\d+.

When matched against the string using the String match method, the date preceded by the colon is found, returned, and printed out:

In the example, \D matches any nonnumber character. Another way to create this particular match is to use the square brackets with a number range, preceded by the caret character (^). If you want to match any character but numbers, use the following:

The same holds true for \d, except now you want numbers, so leave off the caret:

If you wish to match on more than one character type, you can list each range of characters within the brackets. The following matches on any upper- or lowercase letters:

Using these, the regular expression in Example 4-6 could also be given as:

In the following code snippet, the match is not successful because the character searched did not occur at the beginning of the line:

However, the following would be successful:

If the multiple line flag is given (m), the caret matches on the first character after the line break:

If the multiple line flag is used, it matches at the end of the string and just before the line break:

The use of parentheses is significant in regular-expression pattern matching. Parentheses match and then remember the match. The remembered values are stored in the result array:

With this example, the array prints out This is fun 0 twice, separated by a comma indicating two array entries. The first result is the match; the second, the stored value from the parentheses. If, instead of surrounding the entire pattern, you surround only a portion, such as /(^\\D*)[0-9]/, this results:

Only the surrounded matched string is stored.

Parentheses can also help switch material around in a string. RegExp has special characters, labeled $1, $2, and so on to $9, that store substrings discovered through the use of the capturing parentheses. Example 4-7 finds pairs of strings separated by one or more dashes and switches the order of the strings.

Hereâs the end result of this JavaScript:

Notice that the number of dashes is also stripped down to just one dash. This example also introduces another very popular pattern matching character sequence, \\w. This sequence matches any alphanumeric character, including the underscore (underline). Itâs equivalent to [A-Za-z0-9_]. Its converse is \\W, which is equivalent to any nonword character.

You can use more than one character with vertical bars to provide more options:

The curly braces indicate repetition of the preceding character a set number of times. In the following, the pattern searched is two s characters together:

Regular expressions are extremely useful when validating form contents, as demonstrated in Chapter 7.

Getting Regular with Expressions

I barely touched on regular-expression use in this chapterâjust enough to introduce some key elements and several of the characters. If youâre working with forms or other web page-reader input data, or with Ajax, I recommend the book, Mastering Regular Expressions by Jeffrey E.F. Friedl (OâReilly).

There are numerous tools for working with regular expressions, and if you want to use regular expressions, I suggest taking some time to check out at least a few. If you work in Unix or Mac OS X, the utility grep is popular for finding strings within a file. Luckily, thereâs a Windows-based version of the tool, PowerGrep. 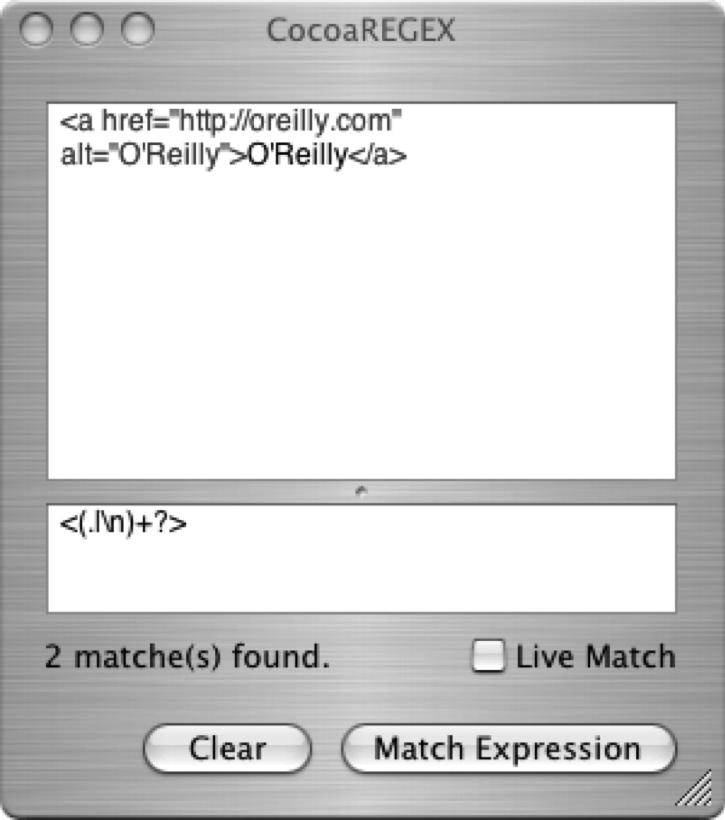 Get Learning JavaScript now with the O’Reilly learning platform.