Get full access to Programming MapPoint in .NET and 60K+ other titles, with free 10-day trial of O'Reilly.

In this introductory chapter, I will go through different location-based application categories and architectures and explain which MapPoint product or technology is appropriate to use in certain scenarios; specifically, I will discuss the fundamental differences between the following three products and technologies from MapPoint:

Location-enabled applications understand location and know how to process it. For example, a conventional store locator is a location-enabled application—simply specify a location and provide a distance within which you want to find stores. Another example is a simple maps-and-directions application that can calculate driving directions using starting and ending addresses and display them on a map. These applications know how to interpret and process the location information.

The intelligence of location awareness comes from the real-time location information obtained either by using an external hardware device, such as GPS, or by other means, such as mobile phone operator networks.

Let’s look at each of these categories in detail.

The main advantage of this architecture is that the location data resides locally, so the applications can provide a faster and richer user experience; however, having data locally may also be viewed as a limitation for other reasons, such as the size of the application (since location data can easily grow to a few Gigabytes) and the data becoming out-of-date due to lack of frequent updates. The advantages include: 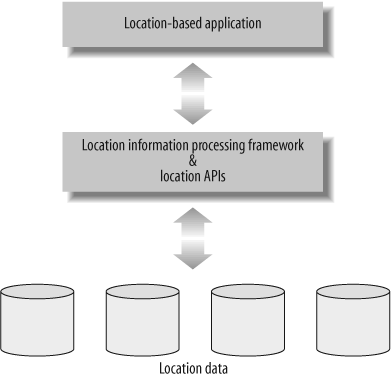 However, there are also disadvantages:

The decision to develop a disconnected location-based application should be based entirely on factors such as connectivity and functional richness of the application, which we will discuss in more detail later in this chapter.

Connected location-based applications contain location information and related processing framework on remotely located servers instead of the local hard disk, which means that a network connection is essential for the application to run. Typical connected-location based application architecture is shown in Figure 1-2. 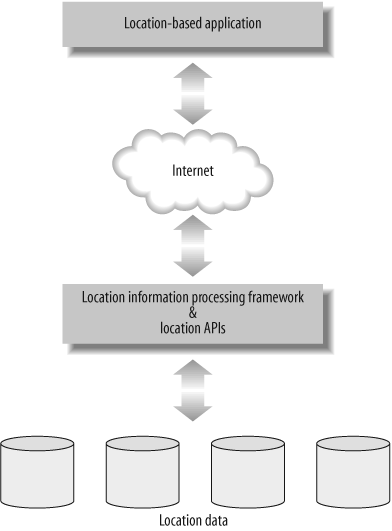 However, there are still disadvantages:

Now that you have been introduced to location application categories and different architectures, let’s see how Microsoft MapPoint technologies enable you to build both connected and disconnected location-based applications.

Location-enabled applications know how to interpret and process location information. The kinds of applications that fall into this category include:

Provide basic planning-related functionalities, such as displaying a desired location on a map and calculating driving directions from one point to another point. For example, both MapPoint 2004 and Streets & Trips 2004 provide this functionality right out of the box.

Helps you to visualize the data using geographic extent. For example, using MapPoint 2004, you can view information such as population statistics in any given city in the United States, or color-code the map based on population density.

Find points of interest around a desired location. For example, you can find a nearby coffee shop when you are traveling in a new town or find local bloggers in the area in which you live.

Along with normal location-based APIs, such as Find, Route, and Render, MapPoint 2004 also offers a rich set of functions (also APIs) for thematic mapping, territory management, and spatial data import from a variety of source formats such as Excel, Access, Txt, and so on.

The APIs provided by MapPoint 2004 are COM- (Component Object Model) based APIs; however, thanks to .NET Framework runtime callable wrappers , you can program with the COM APIs using .NET’s managed code. MapPoint 2004 also provides an ActiveX control that enables MapPoint 2004 application integration into your applications so that you can reuse most of the MapPoint 2004’s application user interface.

Figure 1-3 shows how your applications stack on MapPoint 2004 architectural layers.

With this introduction, let’s look at a simple Windows application that uses MapPoint 2004 ActiveX control to display a map.

Using Visual Studio .NET , you can program with MapPoint ActiveX Control just like any other .NET Windows Forms Control.

When you drag-and-drop the MapPoint ActiveX Control onto a Windows Form, Visual Studio .NET automatically adds a reference to your project and defines a private instance of the ActiveX control:

Using this ActiveX control instance, you can open up a map and place a pushpin at its center:

When you place the above code in the Form.Load event handler and run the application, the Windows Form displays the map as shown in Figure 1-4. 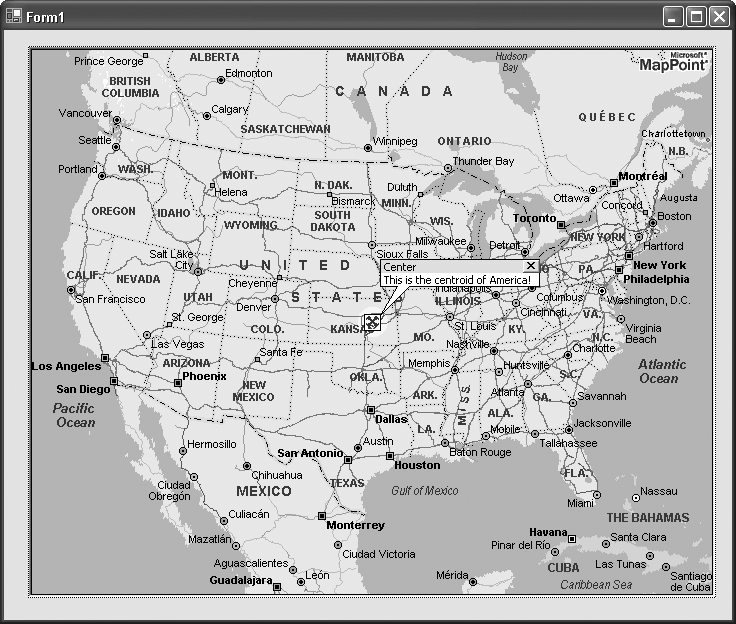 Along with normal location-based APIs, such as Find, Route, and Render, MapPoint Web Service also offers a full set of APIs for custom points of interest data upload and download to enable automated data management.

The APIs provided by MapPoint Web Service are SOAP-based APIs that can be accessed using any XML-enabled programming languages. Using the .NET framework makes it easy to develop applications with MapPoint Web Service; for example, using the following code, you can render a map with a pushpin similar to Figure 1-4:

If you don’t understand anything about these steps, don’t worry—we will look at Map Rendering in detail in Chapter 8. When the code is run, the map is displayed as shown in Figure 1-5.

It looks like a lot more code than MapPoint ActiveX Control, but it is very simple once you understand the MapPoint Web Service object model. Also, it is important to note that the above code returns the binary form of the map image, which displays the map in a .NET Windows Forms Picture Box control; when you use a Web Form application using ASP.NET, you can request the map in a URL format, which can be used in an HTML IMG tag.

Location data in MapPoint Web Service is hosted on Microsoft MapPoint servers, and all of the map and location data is available for developers via the programmable APIs. This provides greater flexibility in building global location-based applications that work for multiple countries and regions. 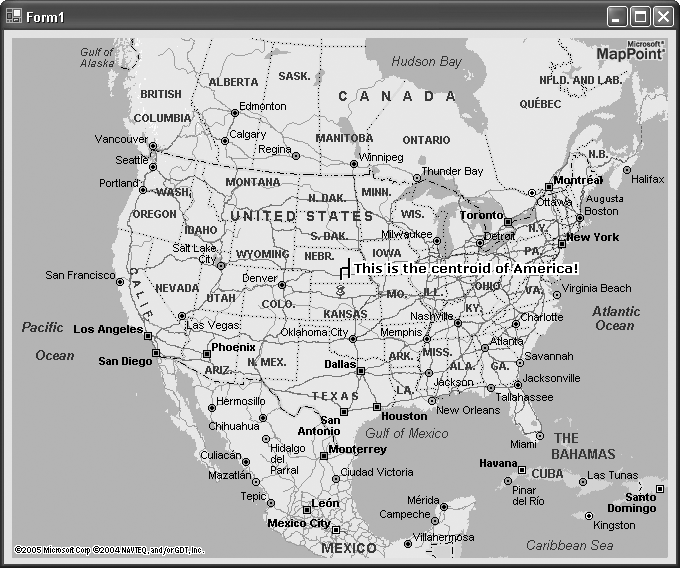 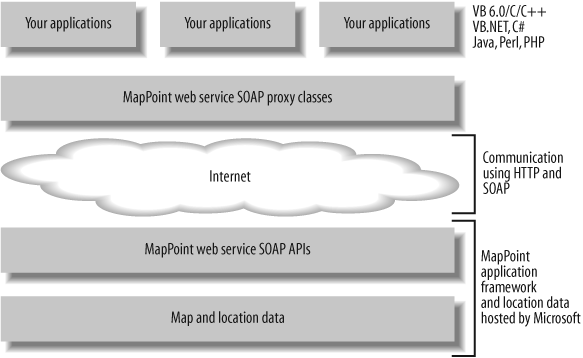 Location-aware applications (or real-time location applications ) apply your current location when processing information to provide smart choices. The kinds of applications that fall into this category are:

Figure 1-7 shows how your location-aware applications build on MapPoint 2004 and a GPS device.

This architectural layer is not very different from Figure 1-3, except that this application uses a GPS device for real-time information.

For further details on how to interface MapPoint 2004 with a GPS device, see Chapter 4.

The most common scenarios for this architecture include real-time navigation applications, real-time location based information logging applications.

All communications specific to a mobile operator are hidden from end users and developers. Thus, MapPoint Location Server works as an aggregator for mobile operators by abstracting implementation details that are specific to the mobile operator to obtain a real-time location. Once the location is obtained, it can be used for many purposes, such as finding nearby ATMs, calculating driving directions based on current location, and so on.

MapPoint Location Server exposes a SOAP XML-based web service that provides methods to obtain real-time location using a mobile phone number or a pager number. This functionality was intentionally exposed as a web service, since it can be consumed by any client on any platform with minimal effort; it is very easy to develop connected location-aware applications for Windows or mobile platforms. Also, while MapPoint Location Server obtains real-time location using mobile devices and mobile operator networks, it uses MapPoint Web Service to obtain other location-based information. 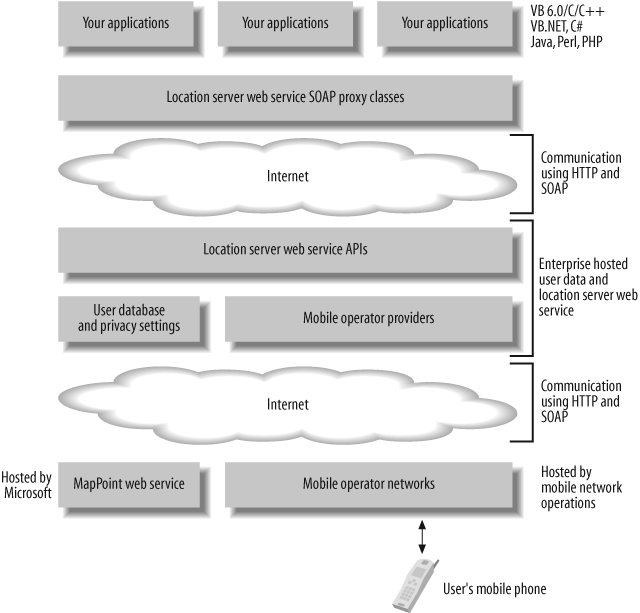 How It All Fits Together

By now, you might be confused about which product to use for each type of application. To clarify your choices, Figure 1-9 summarizes your options. 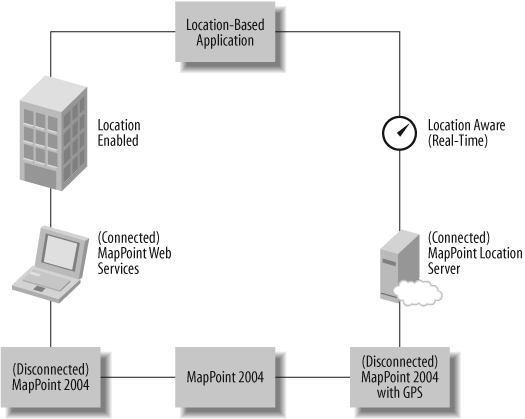 Microsoft MapPoint technologies provide a wide variety of applications, services, and tools to develop location-enabled applications and location-aware applications for both connected and disconnected scenarios. To recap:

If you are wondering how to digest so much information about all these products in one introductory chapter, don’t worry; I will discuss MapPoint 2004, MapPoint Web Service, and MapPoint Location Server in detail in the upcoming chapters.

Get Programming MapPoint in .NET now with the O’Reilly learning platform.