Get full access to SSH, The Secure Shell: The Definitive Guide, 2nd Edition and 60K+ other titles, with free 10-day trial of O'Reilly.

SSH, the Secure Shell, is a popular, powerful, software-based approach to network security.[2] Whenever data is sent by a computer to the network, SSH automatically encrypts (scrambles) it. Then, when the data reaches its intended recipient, SSH automatically decrypts (unscrambles) it. The result is transparent encryption: users can work normally, unaware that their communications are safely encrypted on the network. In addition, SSH uses modern, secure encryption algorithms and is effective enough to be found within mission-critical applications at major corporations.

SSH has a client/server architecture, as shown in Figure 1-1. An SSH server program, typically installed and run by a system administrator, accepts or rejects incoming connections to its host computer. Users then run SSH client programs, typically on other computers, to make requests of the SSH server, such as “Please log me in,” “Please send me a file,” or “Please execute this command.” All communications between clients and servers are securely encrypted and protected from modification. 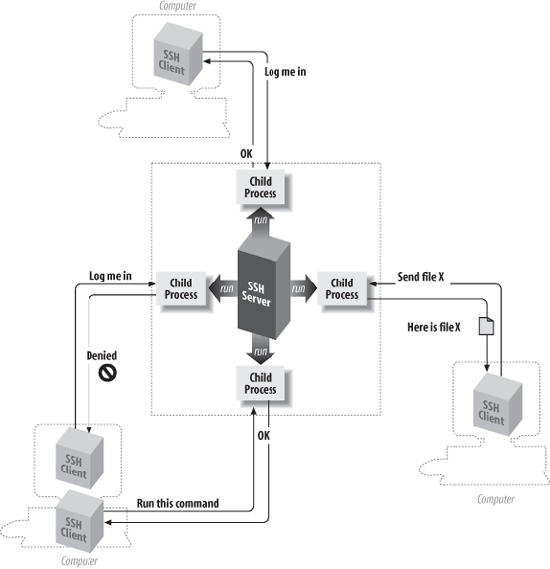 Our description is simplified but should give you a general idea of what SSH does. We’ll go into depth later. For now, just remember that SSH clients communicate with SSH servers over encrypted network connections.

SSH software is very common today. It comes with most Linux distributions, Macintosh OS X, Sun Solaris, OpenBSD, and virtually all other Unix-inspired operating systems. Microsoft Windows has plenty of SSH clients and servers, both free and commercial. You can even find it for PalmOS, Commodore Amiga, and most other platforms. [13.3]

Many SSH clients are inspired by old Unix programs called the “r-commands:” rsh (remote shell), rlogin (remote login), and rcp (remote copy). In fact, for many purposes the SSH clients are drop-in replacements for the r-commands, so if you’re still using them, switch to SSH immediately! The old r-commands are notoriously insecure, and the SSH learning curve is small.

Get SSH, The Secure Shell: The Definitive Guide, 2nd Edition now with the O’Reilly learning platform.