An Executive Guide to IFRS: Content, Costs and Benefits to Business by

Get full access to An Executive Guide to IFRS: Content, Costs and Benefits to Business and 60K+ other titles, with free 10-day trial of O'Reilly.

The chapter so far has given you the essentials of due process. This next section provides background detail on the structure of the organization (Figure 1). 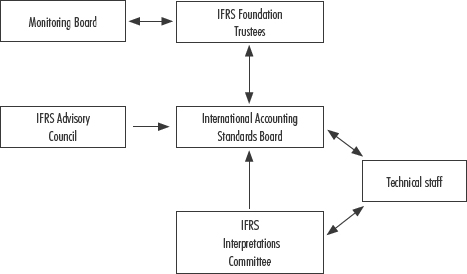 While the heart of the organization is the IASB, the controlling body comprises the Trustees of the IFRS Foundation (formerly known as the IASC Foundation). The Trustees, who are 22 in number, are supposed to guarantee the independence of the IASB. The Trustees are also supposed to raise money for the organization and are responsible for appointing Board members, staff and members of the different advisory bodies. At the same time, the chairman of the IASB is also the chief executive of the IFRS Foundation, which gives that person a curious dual role as chief executive of his (or her) own supervisory body.

Since 2009 the Trustees themselves have had to answer to a Monitoring Board. The creation of the Monitoring Board was an answer to governance issues, as the Trustees were accused of being a self-perpetuating body that was accountable to no one (they decide on their own appointments as well as those of everyone else connected with the organization). The Monitoring Board consists of representatives of the European Union, the SEC, the Japanese Financial Services Agency and two representatives from the International Organization of Securities Commissions (representing ...

Get An Executive Guide to IFRS: Content, Costs and Benefits to Business now with the O’Reilly learning platform.