Get full access to Project Planning and Project Success and 60K+ other titles, with free 10-day trial of O'Reilly.

173
Appendix B: Details of
the Statistical Analysis
SUCCESS MEASURE ANALYSIS
For success, three items measured project eciency, and four measured
overall project success. All measures of success showed a high Cronbach
alpha score which shows they are all correlated. is ts with the results
of our review of the success literature and the view that all success mea-
sures are to some extent correlated (Dvir et al., 2003; Prabhakar, 2008;
Kloppenborg, Manolis, and Tesch, 2009; Zwikael and Globerson, 2006).
Table B.1 shows the results of this analysis.
Based on this result there is no strong reason to exclude any of the items.
e average is .905 and alpha will only improve marginally by deleting
project budget goals.
is also indicates that all of the factors above are interrelated to some
extent. However, we can note that the only factors close to the threshold
for removal are budget goals, scope, and time goals. ese are key compo-
nents of eciency. Scope is the lowest of this category which is in keeping
with Shenhar et al. (1997) who stated that scope was the most important
of the triple constraints for overall success.
e results of the Cronbach’s alpha analysis supported the initial
assumptions that the elements identied for measuring success (Müller
and Turner, 2007; Shenhar et al., 2001; Dvir et al., 2003; Zwikael and
Globerson, 2006) were valid measures of success for this survey and accu-
rately measured the judgments of respondents. Each variable achieved
a high alpha score greater than α = .85. In practical terms, this meant
there was a high degree of condence in the reliability and the data col-
lected through the survey, and they are accurate and meaningful for the
purposes of this research. 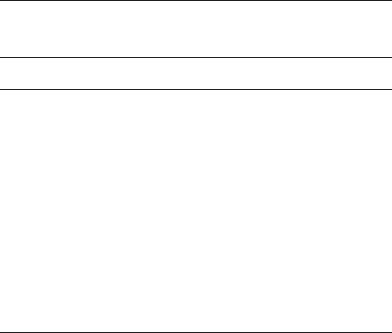 174 • Appendix B
Factor Analysis
In order to identify patterns of interrelationships among the variables
thought to be potential moderators, a factor analysis was completed. Factor
analysis is a technique for investigating whether a number of variables of
interest are related to a smaller number of unobserved uncorrelated vari-
ables (Cooper and Schindler, 2008). Factor analysis assumes the following:
• Multicollinearity
• Homogeneity of sample
Given the size and nature of the sample, these items were not a concern.
Anormalized varimax rotation was selected to achieve the highest load-
ings and best model t. A scree plot was created to conrm three factors
were appropriate, Figure B.10, at end of Appendix B.
Table B.2 is a summary of this analysis. ree factors were found to
be signicant. Factor 2 consists of three of four of the items identied as
planning factors in the hypotheses plus team experience identied within
the factor analysis. Next, Cronbach’s alpha analysis was conducted on the
components of the three identied factors.
e Cronbach alpha coecient is a number that ranges from 0 to 1.
Avalue of 1 indicates that the measure has perfect reliability. A value of 0
indicates that the measure is not reliable and variations are due to random
error. Ideally the alpha value should approach 1. In general, an alpha value
TABLE B.1
Cronbach Alpha Analysis of Success Measures
Summary for Scale: Valid N:1,378
Cronbach Alpha: .905 Standardized Alpha: .922
Alpha if Deleted
Project success rating 0.885
Project sponsors and stakeholders
success rating
0.884
Project budget goals 0.912
Project time goals 0.903
Scope and requirements goals 0.900
Project team’s satisfaction 0.888
Client’s satisfaction 0.884
End users’ satisfaction 0.889

Get Project Planning and Project Success now with the O’Reilly learning platform.