Get full access to Building Wireless Community Networks and 60K+ other titles, with free 10-day trial of O'Reilly.

The IEEE 802.11b specification details 11 possible overlapping frequencies on which communications can take place. Much like the different channels on a cordless phone, changing the channel can help eliminate noise that degrades network performance and can even allow multiple networks to coexist in the same physical space without interfering with each other.

Rather than attempting to set up a single central access point with a high- gain omnidirectional antenna, you will probably find it more effective to set up several low-range, overlapping cells. If you use access point hardware, and all of the APs are connected to the same physical network segment, users can even roam seamlessly between cells. Figure 2-1 shows an example of using multiple APs to cover a large area. 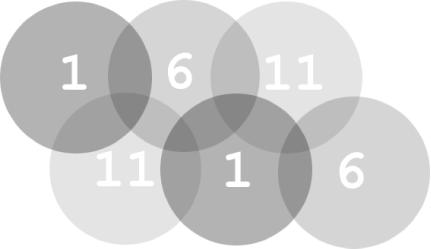 As detailed in the specification, 802.11b breaks the available spectrum into 11 overlapping channels, as shown in Table 2-1.

The channels are spread spectrum and actually use 22MHz of signal bandwidth, so adjacent radios will need to be separated by at least five channels to see zero overlap. For example, channels 1, 6, and 11 have no overlap. Neither do 2 and ...