Get full access to Head First Java, 2nd Edition and 60K+ other titles, with free 10-day trial of O'Reilly.

Chapter 9. Constructors and Garbage Collection: Life and Death of an Object 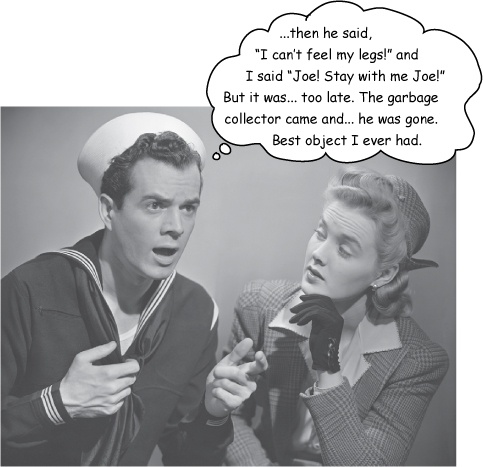 Objects are born and objects die. You’re in charge of an object’s lifecycle. You decide when and how to construct it. You decide when to destroy it. Except you don’t actually destroy the object yourself, you simply abandon it. But once it’s abandoned, the heartless Garbage Collector (gc) can vaporize it, reclaiming the memory that object was using. If you’re gonna write Java, you’re gonna create objects. Sooner or later, you’re gonna have to let some of them go, or risk running out of RAM. In this chapter we look at how objects are created, where they live while they’re alive, and how to keep or abandon them efficiently. That means we’ll talk about the heap, the stack, scope, constructors, super constructors, null references, and more. Warning: this chapter contains material about object death that some may find disturbing. Best not to get too attached.

The Stack and the Heap: where things live

Before we can understand what really happens when you create an object, we have to step back a bit. We need to learn more about where everything lives (and for how long) in Java. That means we need to learn more about the Stack and the Heap. In Java, we (programmers) care about two areas of memory—the one where objects live (the heap), and the one where method invocations and local variables live (the stack). When a JVM ...