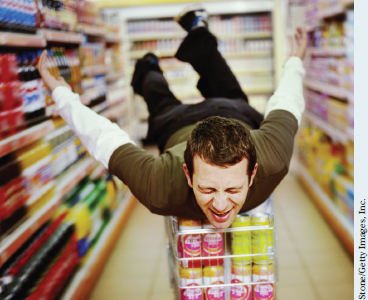 1 Identify the differences between service and merchandising companies.

2 Explain the recording of purchases under a perpetual inventory system.

3 Explain the recording of sales revenues under a perpetual inventory system.

4 Explain the steps in the accounting cycle for a merchandising company.

5 Prepare an income statement for a merchandiser.

In his book The End of Work, Jeremy Rifkin notes that until the 20th century the word consumption evoked negative images. To be labeled a “consumer” was an insult. (In fact, one of the deadliest diseases in history, tuberculosis, was often referred to as “consumption.”) Twentieth-century merchants realized, however, that in order to prosper, they had to convince people of the need for things not previously needed. For example, automobile manufacturers figured out very quickly to make annual changes in their cars so that people would be discontented with the cars they already owned. Thus began consumerism.

Carrefour, headquartered in France, is the largest retailer in Europe and the second ...