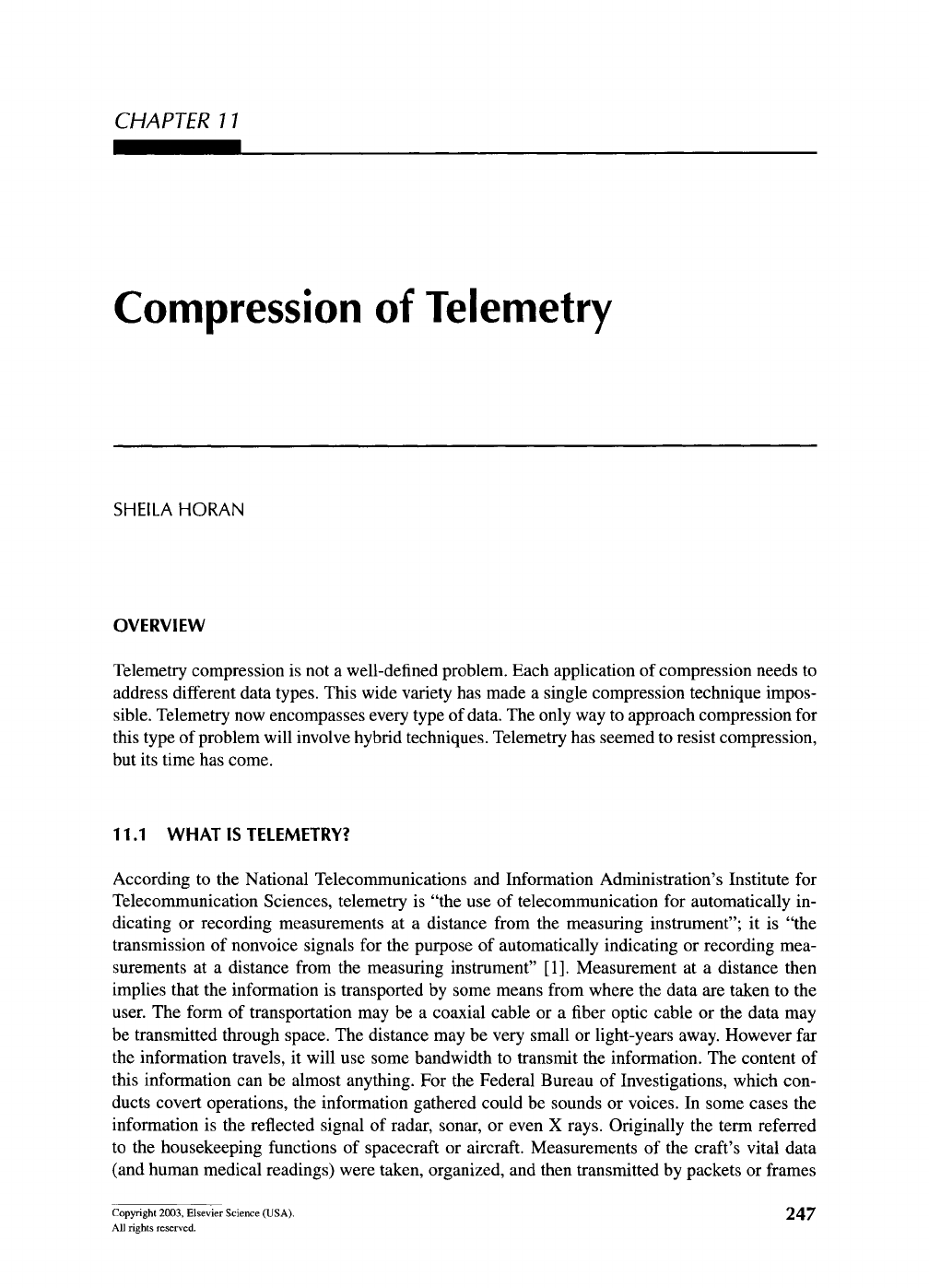 CHAPTER 11
Compression of Telemetry
SHEILA HORAN
OVERVIEW
Telemetry compression is not a well-defined problem. Each application of compression needs to
address different data types. This wide variety has made a single compression technique impos-
sible. Telemetry now encompasses every type of data. The only way to approach compression for
this type of problem will involve hybrid techniques. Telemetry has seemed to resist compression,
but its time has come.
11.1 WHAT IS TELEMETRY?
According to the National Telecommunications and Information Administration's Institute for
Telecommunication Sciences, telemetry is "the use of telecommunication for automatically in-
dicating or recording measurements at a distance from the measuring instrument"; it is "the
transmission of nonvoice signals for the purpose of automatically indicating or recording mea-
surements at a distance from the measuring instrument" [1]. Measurement at a distance then
implies that the information is transported by some means from where the data are taken to the
user. The form of transportation may be a coaxial cable or a fiber optic cable or the data may
be transmitted through space. The distance may be very small or light-years away. However far
the information travels, it will use some bandwidth to transmit the information. The content of
this information can be almost anything. For the Federal Bureau of Investigations, which con-
ducts covert operations, the information gathered could be sounds or voices. In some cases the
information is the reflected signal of radar, sonar, or even X rays. Originally the term referred
to the housekeeping functions of spacecraft or aircraft. Measurements of the craft's vital data
(and human medical readings) were taken, organized, and then transmitted by packets or flames
Copyright 2003, Elsevier Science (USA).
247
All rights
reserved. 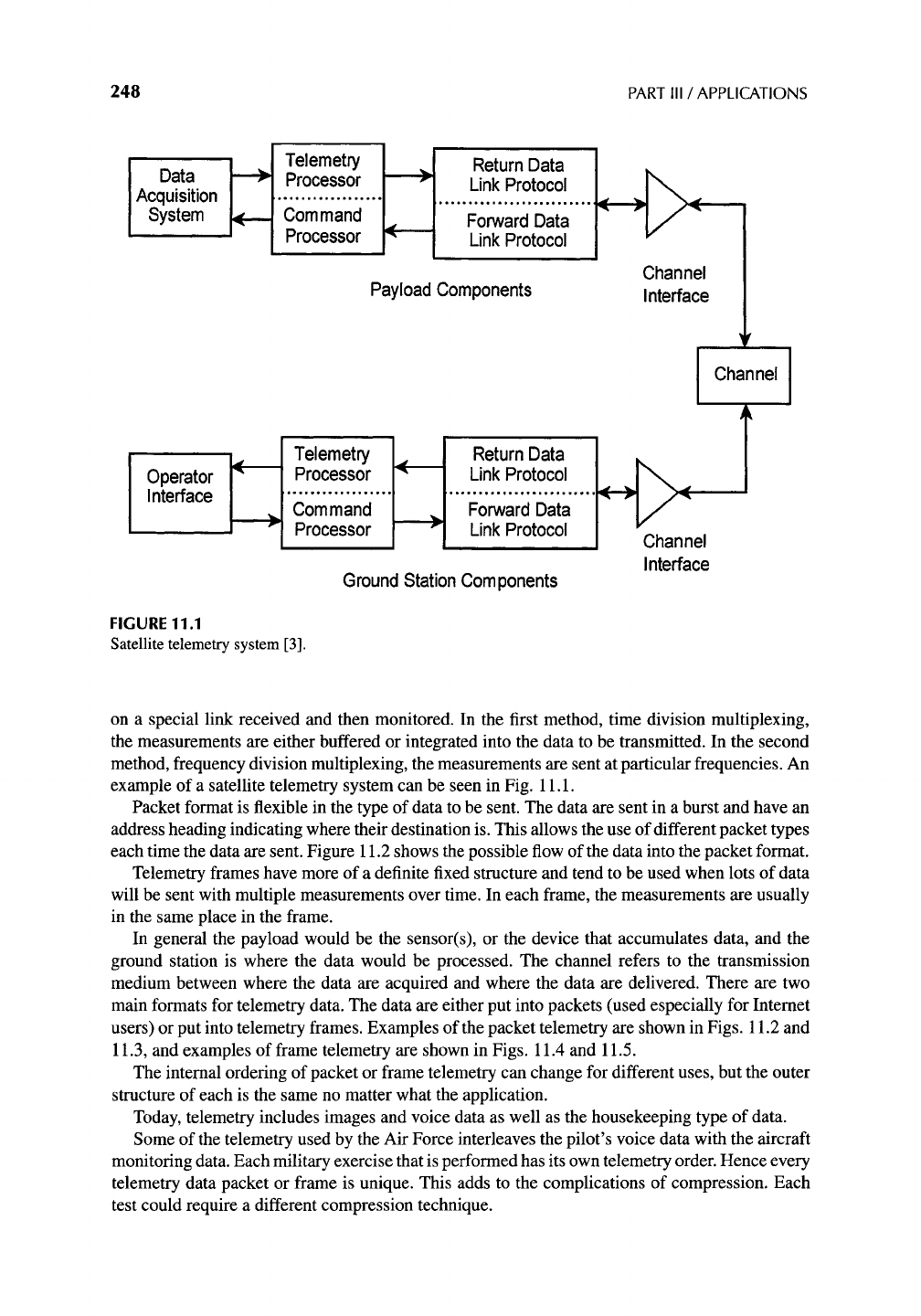 248
PART
III/APPLICATIONS
Data
Acquisition
System
Telemetry
Processor
.o,,o...e.........
Command
Processor
.-,.r
Payload Components
Return Data
Link Protocol
Forward Data
Link Protocol
Channel
Interface
Operator
Interface
e,emet I I ! etu oOat
Processor ~ Link Protocol
.........,,...o... o.. ........,,.
"Command ~ Fo'rwald Data
Processor, i "!, Link Protocol
Ground Station Components
FIGURE 11.1
Satellite telemetry system [3].
Channel
Interface
Channel
on a special link received and then monitored. In the first method, time division multiplexing,
the measurements are either buffered or integrated into the data to be transmitted. In the second
method, frequency division multiplexing, the measurements are sent at particular frequencies. An
example of a satellite telemetry system can be seen in Fig. 11.1.
Packet format is flexible in the type of data to be sent. The data are sent in a burst and have an
address heading indicating where their destination is. This allows the use of different packet types
each time the data are sent. Figure 11.2 shows the possible flow of the data into the packet format.
Telemetry frames have more of a definite fixed structure and tend to be used when lots of data
will be sent with multiple measurements over time. In each frame, the measurements are usually
in the same place in the frame.
In general the payload would be the sensor(s), or the device that accumulates data, and the
ground station is where the data would be processed. The channel refers to the transmission
medium between where the data are acquired and where the data are delivered. There are two
main formats for telemetry data. The data are either put into packets (used especially for Internet
users) or put into telemetry frames. Examples of the packet telemetry are shown in Figs. 11.2 and
11.3, and examples of frame telemetry are shown in Figs. 11.4 and 11.5.
The internal ordering of packet or frame telemetry can change for different uses, but the outer
structure of each is the same no matter what the application.
Today, telemetry includes images and voice data as well as the housekeeping type of data.
Some of the telemetry used by the Air Force interleaves the pilot's voice data with the aircraft
monitoring data. Each military exercise that is performed has its own telemetry order. Hence every
telemetry data packet or frame is unique. This adds to the complications of compression. Each
test could require a different compression technique.