Get full access to Ethernet: The Definitive Guide and 60K+ other titles, with free 10-day trial of O'Reilly.

The 10BASE-T system was the first popular twisted-pair Ethernet system. The invention of 10BASE-T in the early 1990s led to the widespread adoption of Ethernet for desktop computers.

In this chapter we discuss the signaling and media components used in the 10BASE-T system. We also provide the basic configuration guidelines for a single 10BASE-T segment.

The following signaling components may be used in the 10BASE-T system to send and receive signals over the media system:

A 10BASE-T Ethernet interface typically includes a built-in 10BASE-T transceiver that is used to make a direct connection to the twisted-pair segment. Figure 7.1 shows a NIC designed for installation in a desktop computer. 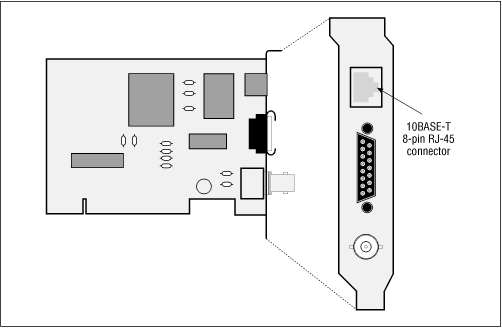 Get Ethernet: The Definitive Guide now with the O’Reilly learning platform.