Get full access to IP Routing and 60K+ other titles, with free 10-day trial of O'Reilly.

Our Canadian friend has always wanted to see the New York Public Library. She gets directions at the information booth: “Make a right on 42nd Street; walk three blocks; look for the lions in front of the library.” The information-booth attendant may have no idea that the library is closed that day, or that the sidewalk on 42nd Street is blocked just then because of fire trucks and 41st Street may be the preferable route. The information booth has given the same directions to the library for the last hundred years and hopefully will for hundreds more -- the route from Grand Central Station to the library, in other words, is static.

In a similar vein, a network administrator can create a static route. So, to reach network 146.1.0.0, we may add the command: 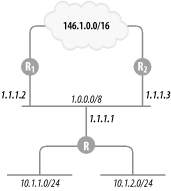 The syntax of the static route command is:

where network and mask specify the IP address and mask of the destination. The next hop may be specified by its IP address or by the interface on which to send the packet. To point a static route to an interface (Ethernet0 in this case), use:

Static routes are smart to the extent that if the next hop (interface or IP address) specified goes down, the router will remove the static route entry from the routing table.

In line 1, the static route in the routing table is accompanied by “[1/0]”. This specifies the administrative distance and the metric associated with the route. We’ll discuss distance and metrics in the next section.

As should be obvious, static routing does not scale well. As the network grows, the task of maintaining static routes becomes more and more horrendous.

Get IP Routing now with the O’Reilly learning platform.