Get full access to IP Routing and 60K+ other titles, with free 10-day trial of O'Reilly.

Most dynamic routing protocols are based on one of two distributed algorithms: Distance Vector or Link State. RIP, upon which Cisco’s IGRP was based, is a classic example of a DV protocol. Link State protocols include OSPF, which we will look at in a later chapter. The following section gets us started with configuring RIP.

Throughout this book, we’ll be using a fictional network called TraderMary to illustrate the concepts with which we’re working. TraderMary is a distributed network with nodes in New York, Chicago, and Ames, Iowa, as shown in Figure 2-1. 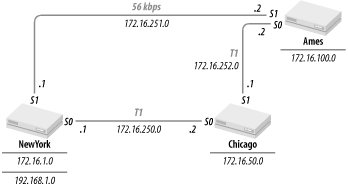 As a distributed process, RIP needs to be configured on every router in the network:

Get IP Routing now with the O’Reilly learning platform.