Land of Lisp by

Get full access to Land of Lisp and 60K+ other titles, with free 10-day trial of O'Reilly.

Lists are a crucial feature in Lisp. They are what hold all your Lisp code (as well as data) together. Take any basic piece of Lisp code, such as the following:

This piece of code contains a symbol (expt) and two numbers, all tied together as a list, indicated by the parentheses. 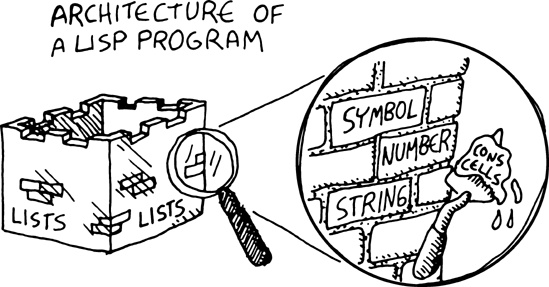 You can think of a Lisp program as a house. If you were to build a house in Lisp, your walls would be made out of lists. The bricks would be made out of symbols, numbers, and strings. However, a wall needs mortar to hold it together. In the same way, lists in Lisp are held together by structures called cons cells.

Lists in Lisp are held together ...

Get Land of Lisp now with the O’Reilly learning platform.