Get full access to Beyond Leadership: Balancing Economics, Ethics and Ecology, Revised Edition and 60K+ other titles, with free 10-day trial of O'Reilly.

Beyond the Peter Principle

Another possible reason for poor self-management is the widely held belief that sooner or later we will reach our level of incompetence: this is also called “plateauing.” There is a strong conviction, illustrated in figure 3.2, that everyone goes through a growth period (A) which is followed by a stable, or stagnant, period (B). This marks the “plateauing” phase which, in turn, is followed by a decline (C). It appears that this endless cycle of birth, growth, stagnation, decay, and death is characteristic of all forms of individual and institutional life. 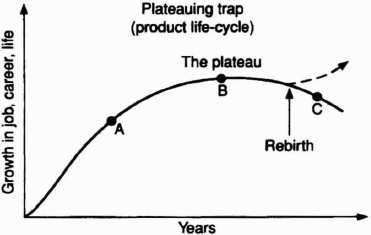 The prospect of plateauing, and then of decline, haunts career executives who have been in the same job for 10–15 years. Most of them see themselves as being between points B and C. Feelings of uncertainty and fear that they may have reached the plateau, or are on their way down, are not uncommon amongst managers in mid-career: the plateau is seen as inevitable. The growing complexity and demands on performance placed on them by the organization, in a contemporary environment of accelerating change, accumulates to such an extent that it makes them feel that in the not-too-distant future they will reach a stage at which they will no longer be able to respond to these demands effectively. This naturally results in frustration, fear, insecurity, and stress. Such feelings are ...

Get Beyond Leadership: Balancing Economics, Ethics and Ecology, Revised Edition now with the O’Reilly learning platform.