Switching to the Mac: The Missing Manual, Mountain Lion Edition by David Pogue

Get full access to Switching to the Mac: The Missing Manual, Mountain Lion Edition and 60K+ other titles, with free 10-day trial of O'Reilly.

Where Your Stuff Is

If you open the icon for your main hard drive (Macintosh HD) from the Go→Computer window, for example, all you’ll find in the Macintosh HD window is a set of folders called Applications, Library, and Users.

Most of these folders aren’t very useful to you, the Mac’s human companion. They’re there for OS X’s own use (which is why Apple no longer puts the Macintosh HD icon on the desktop of new Macs, as it did for 25 years). Think of your main hard drive window as storage for the operating system itself, which you’ll access only for occasional administrative purposes.

In fact, the folders you really do care about boil down to these:

Applications is Apple’s word for programs.

When it comes to managing your programs, the Applications folder (which you can open by choosing Go→Applications) is something like the Program Files folder in Windows—but without the worry. You should feel free to open this folder and double-click things. In fact, that’s exactly what you’re supposed to do. This is your complete list of programs. (What’s on your Dock is more like a Greatest Hits subset.)

Better yet, on the Mac, programs bear their real, plain-English names, like Microsoft Word, rather than abbreviations, like WINWORD.EXE. Most are self-contained in a single icon, too (rather than being composed of hundreds of little support files), which makes copying or deleting them extremely easy.

Your documents, files, and preferences, meanwhile, sit in an important folder called your Home folder. Inside (Figure 1-8) are folders that closely resemble the My Documents, My Pictures, and My Music folders on Windows. 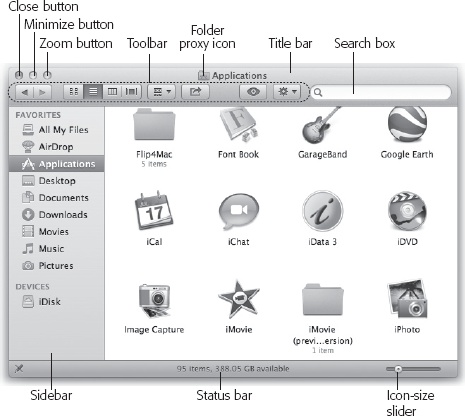 Figure 1-8. When Steve Jobs unveiled Mac OS X at Macworld Expo in 2000, he said his goal was to oversee the creation of an interface so attractive, “you just want to lick it.” Desktop windows, with their juicy, fruit-flavored controls, are a good starting point.

OS X is rife with shortcuts for opening this all-important folder:

Within your Home folder, you’ll find another set of standard Mac folders. (You can tell the Mac considers them holy because they have special logos on their folder icons.) Except as noted, you’re free to rename or delete them; OS X creates the following folders solely as a convenience:

Forcing you to keep all your stuff in a single folder has some major advantages. Most notably, by keeping such tight control over which files go where, OS X keeps itself pure—and very, very stable.

This folder is the same idea as the Windows or WINNT folder on a PC, in that it contains hundreds of files that are critical to the functioning of the operating system. These files are so important that moving or renaming them could render the computer useless, as it would in Windows. And although there are thousands of files within, many are hidden for your protection.

For maximum safety and stability, you should ignore OS X’s System folder just as thoroughly as you ignored the old Windows folder.

Get Switching to the Mac: The Missing Manual, Mountain Lion Edition now with the O’Reilly learning platform.