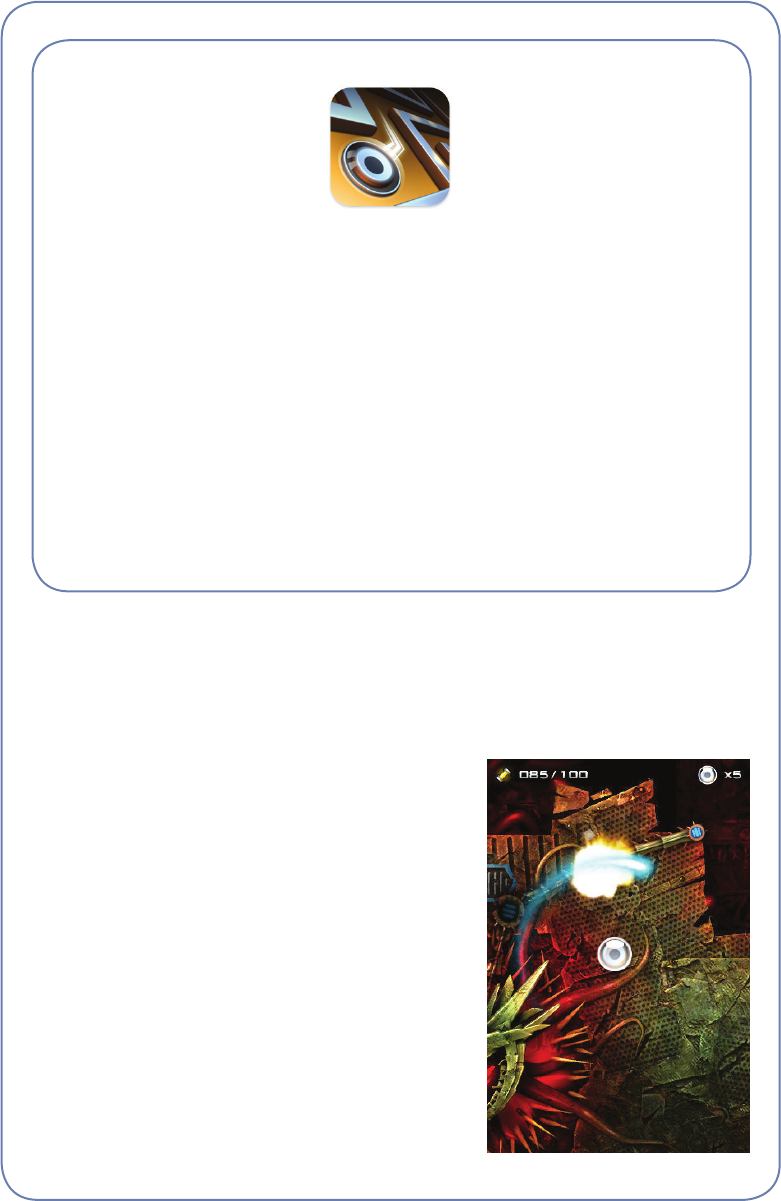 Plaorm: iPhone/iPod Touch
Price: Free–$1.99
Developer: 1337 Game Design
Released: October 14, 2009
Dark Nebula
Episodes One and Two
What Is It?
Dark Nebula is a lot like Illusion Labs’ Labyrinth series in that you control a small metal
ball by tilting your iDevice, but it could more accurately be described as a puzzle-heavy
adventure game. ere’s a shocking amount of vari-
ety in Dark Nebula’s level design, especially in Epi-
sode Two in which the sheer number of dierent haz-
ards you’ll encounter (from crushers to turrets and
even giant boss monsters that you’ll have to ght) is
astounding.
Players who try for fast level-completion times will
nd that oen the biggest challenge in Dark Nebula is
keeping the ball under control when it’s rolling at high
speeds. is isn’t a critique of the game’s controls
those are excellent. It’s more that Dark Nebula is a game
about ne-tuned movement through treacherous areas.
Especially in Episode Two’s boss bales (in which you’re
given a weapon to defend yourself), accuracy is key,
and players with shaky hands won’t do very well.

60  Dark Nebula
Dark Nebula is so polished that for many gamers who picked it up in October of 2009,
it was like emerging from a dark room into one that was fully lit. e dierences in quality
between it and many of the games that came before it is striking.
Behind the Game
Anders Hejdenberg is no stranger to the games industry. e Swedish developer is cred-
ited on over a dozen games, and even worked as the lead designer on EA’s Baleeld 2:
Modern Combat. He kept working there for a short while aer his work on the Baleeld
series was done, but ultimately became dissatised with the industry, which he saw as
being fueled by a desire for money rather than innovation or a passion for design. Hejden-
berg le, taking what he describes as a long vacation.
Time passed, and Hejdenberg began to feel the itch to get back into game design. Re-
membering his aversion to the politics involved in working on big-budget games, he de-
cided to do things in a new way. “I had bought the iPhone just a couple of weeks aer its
launch, and I was very impressed by what it could do,” he says. “By complete coincidence,
my friend had just le his job to work as an iPhone programming consultant, and I was
thinking about various games he could potentially create for it.”
During a sleepless night Hejdenberg had an idea, and within a month he had hired his
friend to create what would eventually become Dark Nebula: Episode One. “e months
that followed were truly amazing,” says Hejdenberg. “e magic I had felt starting out in
the industry was back, and making games was fun again. ere was no publisher telling
us what to do, there was no creative director interfering with the creative processit was
just pure bliss.”
During development of the rst episode of Dark Nebula, a big part of the challenge was
nailing down the game’s controls. Hejdenberg was hesitant at rst to use tilt controls, be-
cause in his experience games using this method simply didn’t feel right (mind you, this
was before the release of Tilt to Live). “We thought it was the accelerometer’s fault, but it
turned out that the controls were just not implemented very well,” he says.
Episode One was eventually completed, and the game got plenty of aention from mag-
azines and blogs but sales didn’t exactly skyrocket. Despite this, Hejdenberg knew that he
wanted to make a second episode. “We were having too much fun,” he explains.
Hejdenberg didn’t want his sequel to be just more of the same, so he and his team dove
into Episode Two with bigger ambitions. ey added a combat system, bigger levels, and
boss ghts. is allowed for much greater overall variety in game design, as Hejdenberg’s
team could include enemies, bigger puzzles, and vastly more elaborate level design.
Despite having ambitious plans for the sequel, Hejdenberg believed he could nish
the game in just ve months. at was all he had money for, anyway. “We ran into some
problems,” says Hejdenberg. “We wanted a lot of new things for the second episode, and
some of those things took a lot longer than we had anticipated.”