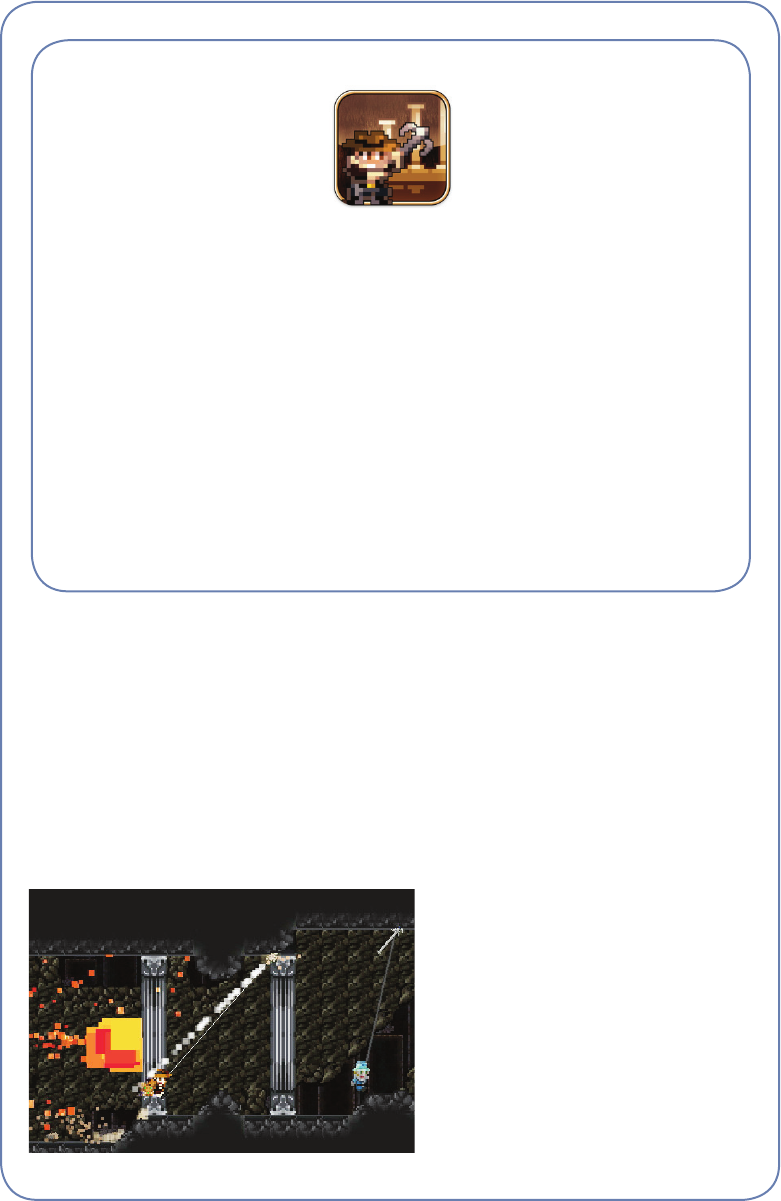 Plaorm: iPhone/iPod Touch
Price: $2.99
Developer: Rocketcat Games
Released: October 16, 2009
Hook Champ
What Is It?
Hook Champ is the rst in a trilogy of titles from Rocketcat Games, all of which revolve
around the concept of using a grappling hook to navigate a two-dimensional, side-scroll-
ing environment. In Hook Champ you’ll have to grapple and swing your way through a
number a dungeons using your hook, which is unleashed by a simple tap on the upper
area of the screen.
Hook Champ is all about momentum. You’ll want to time your jumps so that you get
as much forward momentum as pos-
sible from your swings, and then use
equally good judgment to decide
where to place your next hook. As
you progress you’ll unlock improve-
ments for all of your equipment
including rocket boots (useful for
launching yourself out of deadly sit-
uations), beer grappling hooks, and
even guns that can be used to blast
through certain types of obstacles.

121Hook Champ
Improving your completion times for individual levels is a big part of the strategyfaster
times allow you to get more coins, which in turn allows you to improve your equipment,
which completes the loop by helping to improve your completion times.
Hook Champ benets a lot from its humor, which reveals itself in the lile bits of dia-
logue at the beginning of each level. e banter between characters and goofy unlockable
costumes give the game a lighthearted vibe that feels like an extra-sarcastic Indiana Jones
adventure, which is helpful in infusing a bit of a unique avor into an otherwise tradition-
al-looking pixel-art game.
Sometimes levels in Hook Champ kill you with obstacles that you couldn’t have fore-
seen, but that’s why the game has been designed to accomodate multiple playthroughs
to help you progress. In some ways its high-diculty level feels like an aempt to mask
its short length, but most players will appreciate the challenge and get a solid amount of
replay value out of the levels.
Behind the Game
Kepa Auwae was fed up with mainstream gaming. He saw a developing trend in which
mainstream games were geing steadily less innovative: everything was becoming more
focused on “grinding” against enemies in repetitive bales, yet budgets continued to soar.
“We saw a future where eventually all games would be designed to basically be just joy-
less, part-time jobs,” says Auwae. “Jobs that oer 15-dollar micropayments that let you
skip content so you can get right to the achievements.”
Despite having never developed a game before, Auwae got together with two friends
he had met while on an IRC chat channel (Jeremy Orlando, a programmer, and Bran-
don Rhodes, the team’s artist) and formed Rocketcat Games, a team made up of people
who lived in three dierent places (Washington, Arizona, and Japan), and who all had
full-time jobs to worry about. It wasn’t the strongest start, but the team had raw, cynical
determination on their side.
Platformers constitute a genre that requires incredibly precise controls: players need
to be able to make tiny changes in their movements at any given moment, so access to
physical buons is vital to these games’ control schemes. at is obviously something the
iPhone is unable to provide. Kepa Auwae of Rocketcat Games recognized this, and set
about thinking of alternate ways to handle jumping in a platformer.
Auwae and his team experimented with a number of dierent options like ight,
gravity-ipping, and explosive propulsion, but seled on a grappling hook for the supe-
rior control experience it oered. “Instead of jumping and then having to control your
horizontal movement with arrow buons and your second hand, we went for a hold-to-
launch, release-to-let-go hook-mechanic,” says Auwae. “is moved the ‘jump’ controls
from tactile buons to a mixture of visual cues and rhythm.”