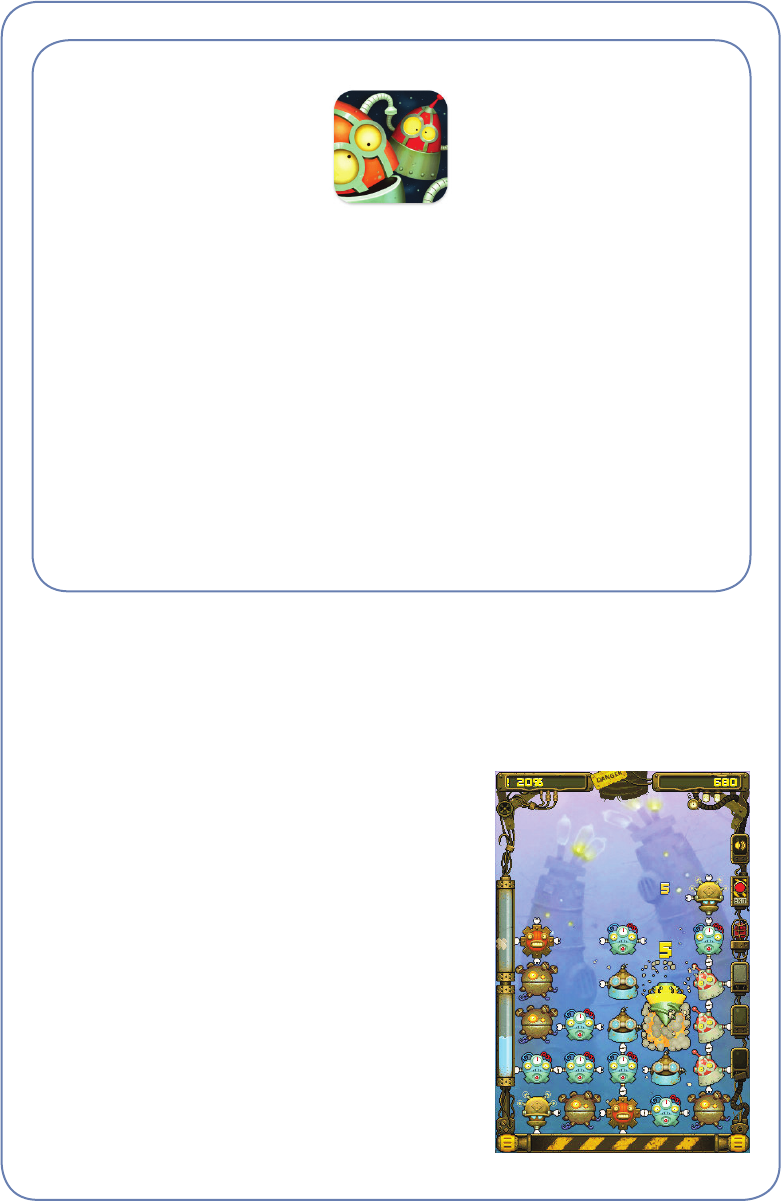 Plaorm: iPad/iPhone/iPod Touch (universal app)
Price: $.99
Developer: Tatem Games
Released: February 21, 2011
Robosockets
Link Me Up
What Is It?
If you glance at a screenshot of Robosockets, it doesn’t look like much more than another
ri on the “falling blocks” genre of puzzle games. Luckily for you, that’s not the case.
In Robosockets, all of the puzzle pieces are lile liv-
ing robots with various numbers of sockets that ex-
tend from their four sides. Some bots are completely
covered in sockets, whereas others only have one or
two. ese sockets are useful for connecting one ro-
bot to another, which is important for your survival,
because connecting more than ve robots will cause
all of them to blow up, clearing the play area and al-
lowing you to continue matching the various bots
that fall from the sky.
Much of Robosockets’ strategy has to do with laying
down bots in a way that will leave you with the most
options. e game does tell players what type of bot
will be coming next (a feature added six months aer
the game rst hit the App Store), so you’ll be able to 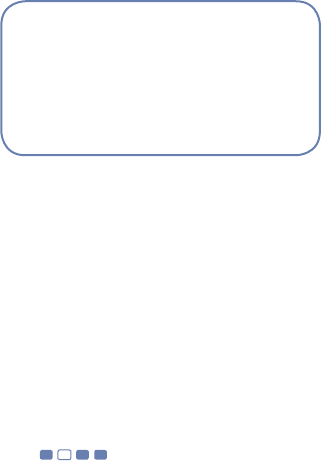 184  Robosockets
examine the piles of robot parts at the boom of the play area and use that information
to quickly connect as many robots as possible, while trying to not let any get stuck with
nowhere to go.
At rst the game will seem a bit simple, but as you make your way through the single-
player campaign you’ll slowly be introduced to new power-ups and strategies that really
open the game up and make it into something that can be fun to fool around with for a
long time. A lot of these power-ups (like the bomb or the pusher-bot) allow you to push
robots out of their otherwise locked-in positions, so that you can break up bad situations
and potentially salvage a game you’re losing.
Like the games that it draws inspiration from, Robosockets is the type of game that can
oer hours of fun. It’s just up to you to try it rst.
Behind the Game
Tatem Games’ roots go back to 1995, when Ukranian game studio Action Forms was
founded. Tatem Games is a smaller company within Action Forms, focusing largely on
mobile gaming.
Tatem had an early hit on the App Store with Racer, a simple trac-avoidance game
that got solid early reviews and lots of sales. e success of Racer convinced the company
to pour more resources into the iOS platform, and it expanded from three employees to
seven in anticipation of the increased development it would be doing.
Robosockets producer Ivan Pogodichey says the idea for the game came to him while
he was taking a shower in the early fall of 2009. His idea was simple: what if you re-
placed the Terominoes in Tetris with the pipes from Pipe Mania? “It seemed so obvi-
ous a combination that the main concern was whether such a
game already existed,” says Pogodichey. e team scoured the
App Store and Flash-game web portals for similar games, but
they couldn’t nd anything that used the game’s mechanics. Po-
godichey presented the game idea to the rest of his sta, and
prototyping began that day.
Originally the game was to have a circus theme, but the low-
resolution screen of the iPhones and iPod Touches on the mar-
ket at that time wouldn’t have supported the detailed art style the team hoped for. Tatem
Games didn’t want to take the easy route and slap a doodle theme on its game, so it dis-
carded the circus theme and went back to the drawing board. Before long it came up with
a prototype that resembled a completed game, albeit one without a decent art style. “We
joked that the game could be released as it was, but we had ambitions to create something
outstanding,” says Pogodichey.
Without any clear direction, the game that would later become Robosockets languished,
and the team moved on to other projects. Sales of Racer had slowed, so they ported an old
Stascs
•Development me: 1.5 years
•Percentage of people who upgrade
from the free version of Robosockets
to the paid version: 5%