Get full access to HTTP: The Definitive Guide and 60K+ other titles, with free 10-day trial of O'Reilly.

Web clients often open connections to the same site. For example, most of the embedded images in a web page often come from the same web site, and a significant number of hyperlinks to other objects often point to the same site. Thus, an application that initiates an HTTP request to a server likely will make more requests to that server in the near future (to fetch the inline images, for example). This property is called site locality. 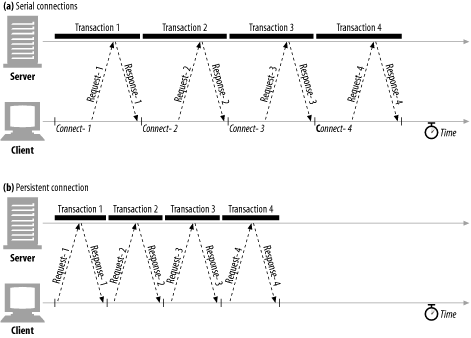 Keep-alive is deprecated and no longer documented in the current HTTP/1.1 specification. However, keep-alive handshaking is still in relatively common use by browsers and servers, so HTTP implementors should be prepared to interoperate with it. We’ll take a quick look at keep-alive operation now. Refer to older versions of the HTTP/1.1 specification (such as RFC 2068) for a more complete explanation of keep-alive handshaking.

Clients implementing HTTP/1.0 keep-alive connections can request that a connection be kept open by including the Connection: Keep-Alive request header. 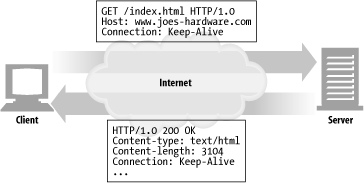 The keep-alive behavior can be tuned by comma-separated options specified in the Keep-Alive general header:

The Keep-Alive header is completely optional but is permitted only when Connection: Keep-Alive also is present. Here’s an example of a Keep-Alive response header indicating that the server intends to keep the connection open for at most five more transactions, or until it has sat idle for two minutes:

Here are some restrictions and clarifications regarding the use of keep-alive connections:

The Connection header and blind relays

The problem comes with proxies—in particular, proxies that don’t understand the Connection header and don’t know that they need to remove the header before proxying it down the chain. Many older or simple proxies act as blind relays , tunneling bytes from one connection to another, without specially processing the Connection header.

Imagine a web client talking to a web server through a dumb proxy that is acting as a blind relay. This situation is depicted in Figure 4-15.

Here’s what’s going on in this figure:

In addition, there are a few hop-by-hop headers that might not be listed as values of a Connection header, but must not be proxied or served as a cache response either. These include Proxy-Authenticate, Proxy-Connection, Transfer-Encoding, and Upgrade. For more information, refer back to Section 4.3.1.

Browser and proxy implementors at Netscape proposed a clever workaround to the blind relay problem that didn’t require all web applications to support advanced versions of HTTP. The workaround introduced a new header called Proxy-Connection and solved the problem of a single blind relay interposed directly after the client—but not all other situations. Proxy-Connection is implemented by modern browsers when proxies are explicitly configured and is understood by many proxies.

The idea is that dumb proxies get into trouble because they blindly forward hop-by-hop headers such as Connection: Keep-Alive. Hop-by-hop headers are relevant only for that single, particular connection and must not be forwarded. This causes trouble when the forwarded headers are misinterpreted by downstream servers as requests from the proxy itself to control its connection.

Figure 4-16a-d shows how a blind relay harmlessly forwards Proxy-Connection headers to the web server, which ignores the header, causing no keep-alive connection to be established between the client and proxy or the proxy and server. The smart proxy in Figure 4-16e-h understands the Proxy-Connection header as a request to speak keep-alive, and it sends out its own Connection: Keep-Alive headers to establish keep-alive connections. 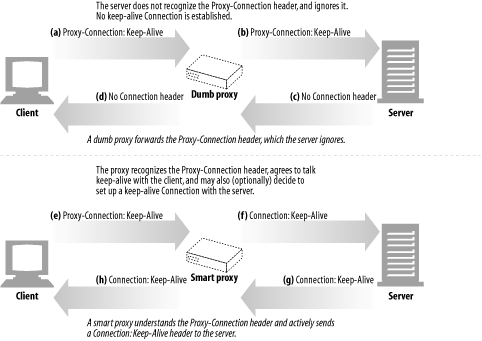 This scheme works around situations where there is only one proxy between the client and server. But if there is a smart proxy on either side of the dumb proxy, the problem will rear its ugly head again, as shown in Figure 4-17. 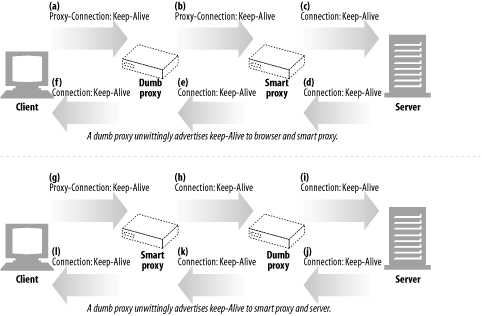 Furthermore, it is becoming quite common for “invisible” proxies to appear in networks, either as firewalls, intercepting caches, or reverse proxy server accelerators. Because these devices are invisible to the browser, the browser will not send them Proxy-Connection headers. It is critical that transparent web applications implement persistent connections correctly.

Here are the restrictions and clarifications regarding the use of persistent connections:

[16] Additionally, the request and response time might also be reduced because of elimination of the slow-start phase. This performance benefit is not depicted in the figure.

[17] There are many similar scenarios where failures occur due to blind relays and forwarded handshaking.

Get HTTP: The Definitive Guide now with the O’Reilly learning platform.