10 Prologue A Tale That Begins onthe Mn
The Story of Kaguya-hime
Long, long ago, an elderly bamboo cutter was walking
through a grove when he came upon a mysterious
glowing stalk of bamboo. When he cut it open, he
found a tiny girl inside—so tiny that she fit in the palm
of his hand. Thinking that the gods had taken pity on
him and his wife, an old childless couple, he decided
to bring her home so that he and his wife could raise
her as their own child.
From that day forward, whenever the old man
cut down a stalk of bamboo, he found a piece of gold
inside. Little by little, he became very wealthy. The girl
grew up quickly, and in just three months she grew
into a kind and loving daughter.
The girl, who was named Kaguya-hime, was
so exceptionally beautiful that word of her beauty
reached even the faraway capital. Many suitors called
on her, but she wasn’t interested in any of them.
However, five of these men were unable to
ignore her beauty, and they asked for her hand in
marriage.
As the condition for accepting a marriage pro-
posal, Kaguya-hime asked each of her suitors to
bring back a rare treasure that was impossible to
find. Naturally, no one succeeded.
How’d she grow
up so fast?
It’s a fairy tale,
duh...
What
were the
treasures?
Oh, things like a shining
multicolored jewel
from a dragon’s neck,
you know...

The Story of Kaguya-hime 11
Kaguya-hime also caught the eye of the emperor—but he
too was rejected. As the years passed, Kaguya-hime became
more and more pensive whenever she gazed at the Moon, and
as the autumnal full Moon approached, she would often burst
into tears. The old bamboo cutter was very worried. When he
asked her what was wrong, she replied, “I am not from this
world! I come from the capital of the Moon, and I must return
there when the Moon is full.”
Hearing of this, the emperor tried to capture Kaguya-hime
for himself before she could return to the Moon. He surrounded
her house with soldiers, but then soldiers from the Moon came
down and defeated them.
Before leaving for the Moon, Kaguya-hime gave the old
bamboo cutter a letter and an elixir of immortality to give to
the Emperor. Then the Moon’s emissaries put the celestial
maiden’s feathered robe on her shoulders, and all of her
memories of Earth disappeared. She returned to the Moon,
pulled upward by an invisible force.
The Emperor read her letter but decided that he didn’t
want to live forever if he couldn’t see her again. So he ordered
his men to burn the elixir on top of the highest mountain in
the country—the one that was closest to the Moon.
From then on, the mountain where the elixir was burned
became known as Mt. Fuji, from the Japanese word for immor-
tality (fushi).
Prince Otomo was asked to find the dragon's
jewel, But he knew if he entrusted the task to his
samurai, one of them would steal it. So he set
sail himself. But along the way, he encountered a
teible storm. This kind of adventure certainly
makes an interesting story, but let’s move along...
When would
the Mn be
fu?
By the old calendar, it was
the 15th night of the 8th
month. Nowadays it would be
the fu Mn that ours
sometime in September—
theharvest Mn. 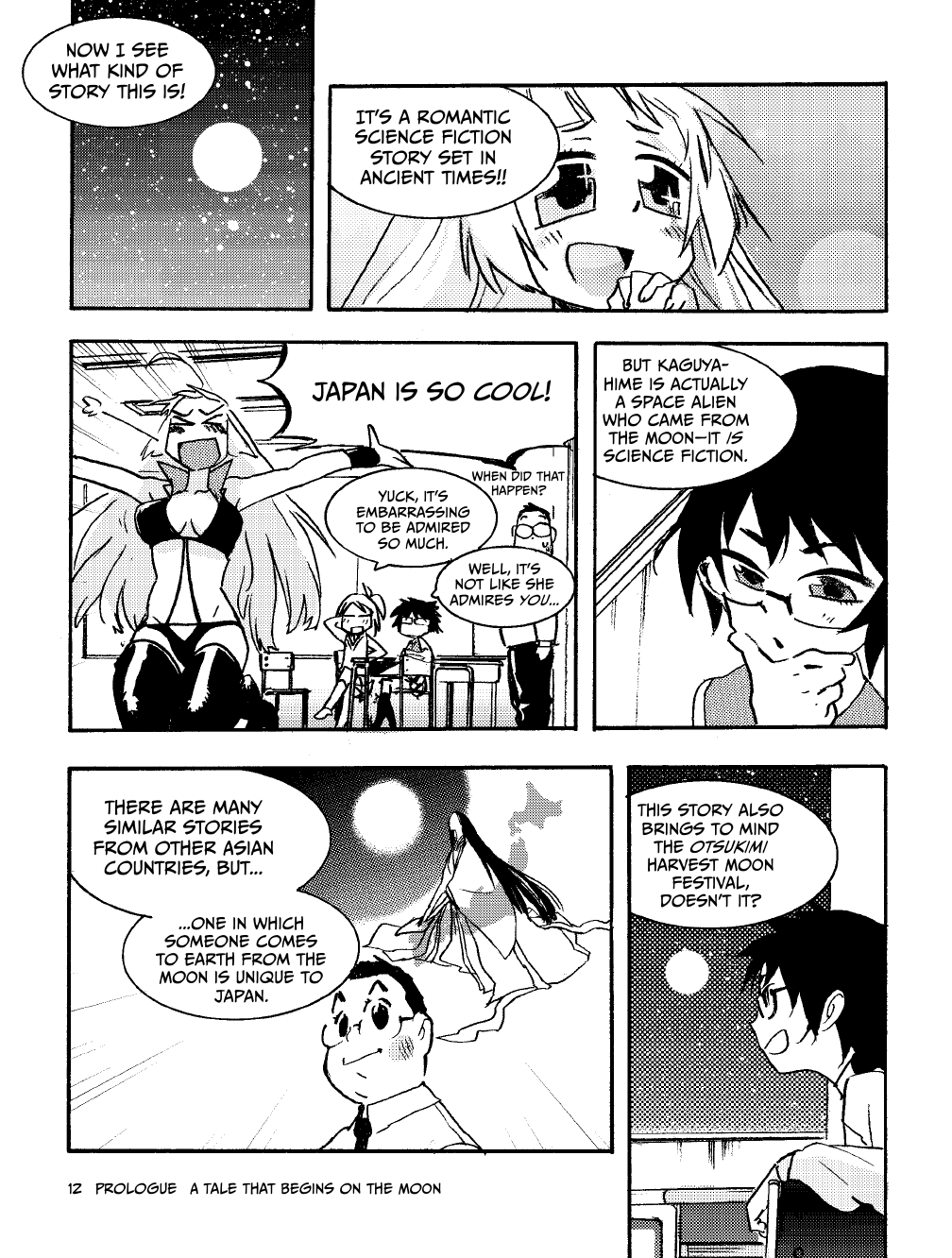 12 Prologue A Tale That Begins onthe Mn
Now I s
what kind of
story this is!
It’s a romantic
science fiction
story set in
ancient times!!
Japan is so cl!
Yuck, it’s
embaaing
to be admired
somuch.
We, it’s
not like she
admires you...
When did that
haen?
But Kaguya-
hime is actuay
a space alien
who came from
the Mn—it is
science fiction.
There are many
similar stories
from other Asian
countries, but...
...one in which
someone comes
to Earth from the
Mn is unique to
Japan.
This story also
brings to mind
the otsukimi
harvest Mn
festival,
doesn’t it?