Start your free trial
A Somewhat Complicated Explanation of Kepler’s Laws 73
for observing heavenly bodies, was a genius. In particular, his establishment of the scientific
methodology in use today—in which we mathematically analyze experimental results to con-
struct theories—is surely a worthy achievement for someone referred to as the father of
modern science.
What Has the Heliocentric Theory Taught Us?
It is generally accepted that the debate over the geocentric versus the heliocentric theory
finally ended in 1619, when Kepler’s Third Law was published (the first and second were
published in 1609). However, even today, many people do not seem to understand the true
significance of the heliocentric theory.
An example of this is illustrated by time machines that appear in science fiction novels
and movies. Whether or not a time machine can actually be created is beside the point. In
a typical story, a person who boards a time machine travels through time without changing
location—it’s a convention that the person will reappear at the same place, but in a differ-
ent era.
However, in space, there is no true “same place” throughout time. Earth rotates while
revolving around the Sun. In addition, as you will learn in a later chapter, the solar system
itself is revolving within the Milky Way galaxy, and the Milky Way also does not stay in one
fixed place. In other words, no matter what scale we use to view the universe, there is no
place in it that is ever at rest.
Therefore, we cannot indicate a specific place in space. Since everything is moving and
there is no reference point, it is impossible to identify even the position of Earth after sev-
eral seconds.
So while the heliocentric theory is said to be the starting point for modern cosmologi-
cal theory (in which the universe is always moving and changing), the theory advocated
by Copernicus was actually just a Sun-centered theory and not a true heliocentric theory.
Nevertheless, we’ve become conscious of philosophical concepts beyond science that posit
that neither Earth nor the Sun is the center of the universe and everything is moving and
changing in perpetual motion.
A Somewhat Complicated Explanation of Kepler’s Laws
Let’s take a closer look at Kepler’s Laws.
First Law: The Orbit of Every Planet Is an Ellipse with
the Sun at the Focus
With this law, Kepler clearly indicated that the orbits of the planets are ellipses rather than
circles. Moreover, the Sun is positioned at one of the two foci rather than at the center of
the ellipse. This relationship is illustrated in the following figure. 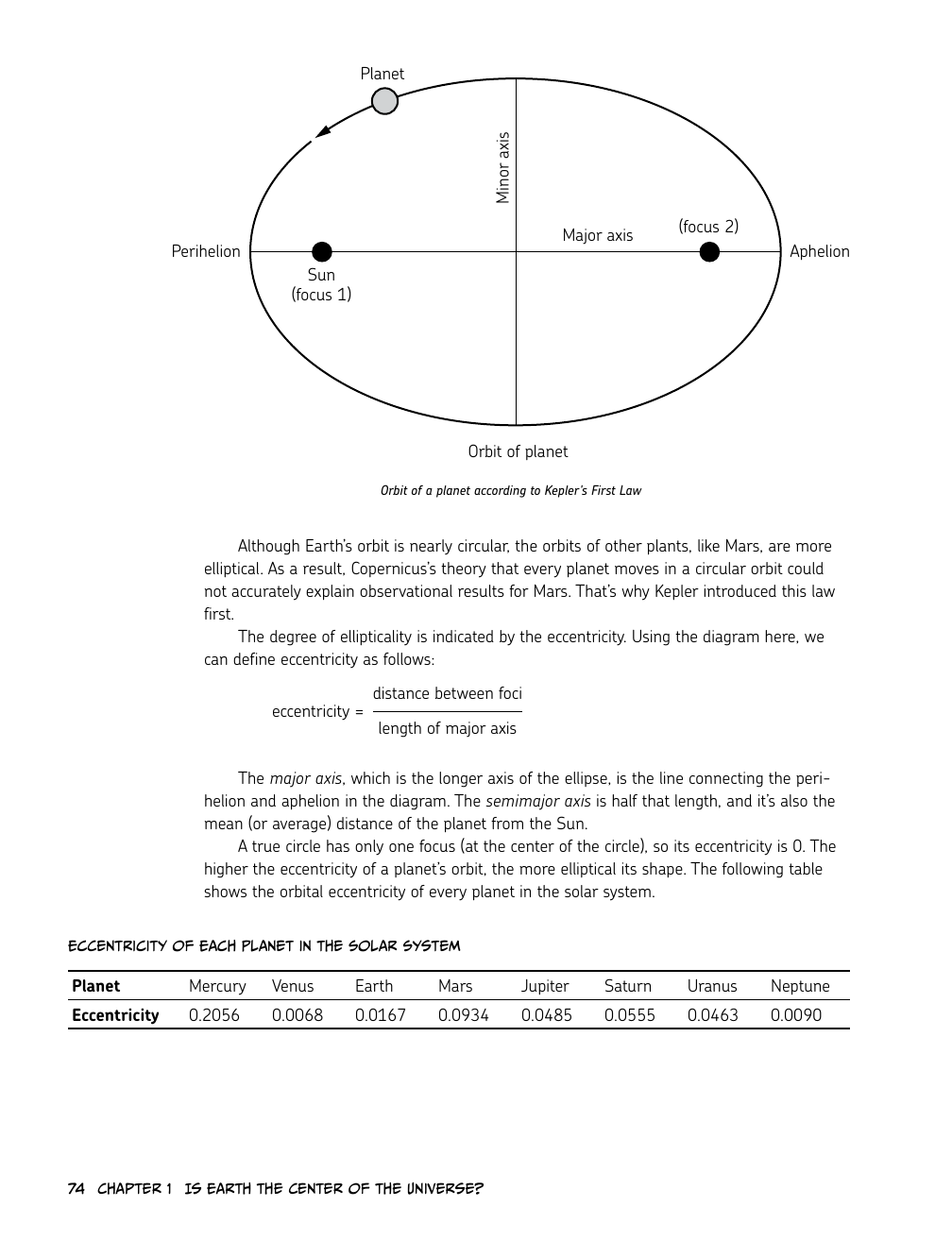 74 Chapter 1 Is Earth the Center ofthe Universe?
Although Earth’s orbit is nearly circular, the orbits of other plants, like Mars, are more
elliptical. As a result, Copernicus’s theory that every planet moves in a circular orbit could
not accurately explain observational results for Mars. That’s why Kepler introduced this law
first.
The degree of ellipticality is indicated by the eccentricity. Using the diagram here, we
can define eccentricity as follows:
eccentricity =
distance between foci
length of major axis
The major axis, which is the longer axis of the ellipse, is the line connecting the peri-
helion and aphelion in the diagram. The semimajor axis is half that length, and it’s also the
mean (or average) distance of the planet from the Sun.
A true circle has only one focus (at the center of the circle), so its eccentricity is 0. The
higher the eccentricity of a planet’s orbit, the more elliptical its shape. The following table
shows the orbital eccentricity of every planet in the solar system.
Eentricity of Each Planet in the Solar System
Planet
Mercury Venus Earth Mars Jupiter Saturn Uranus Neptune
Eccentricity
0.2056 0.0068 0.0167 0.0934 0.0485 0.0555 0.0463 0.0090
Planet
Orbit of planet
Sun
(focus 1)
(focus 2)
Perihelion
Aphelion
Major axis
Minor axis
Orbit of a planet according to Kepler's First Law