Wiley Handbook of Science and Technology for Homeland Security, 4 Volume Set by

Get full access to Wiley Handbook of Science and Technology for Homeland Security, 4 Volume Set and 60K+ other titles, with free 10-day trial of O'Reilly.

Preventing the introduction of diseases, especially foreign animal diseases (FADs) and diseases that could cause food-borne illness, is critically important. Diseases of this type can be devastating to the individual farm, to the industries affected, and also to the overall economy. The value of US animal production is substantial (Table 1) [1]. In the 2002 census of agriculture, the United States had approximately 1.1 million animal-producing farms with average assets (land, buildings, and equipment) exceeding $500,000 [2]. The market value of agricultural production sold from animal production farms in 2002 was approximately $107 billion, and including crops sold from these farms, the total sales was $109 billion. The animal-producing sector exceeds the crop sector in agricultural value of products sold by several billion dollars. 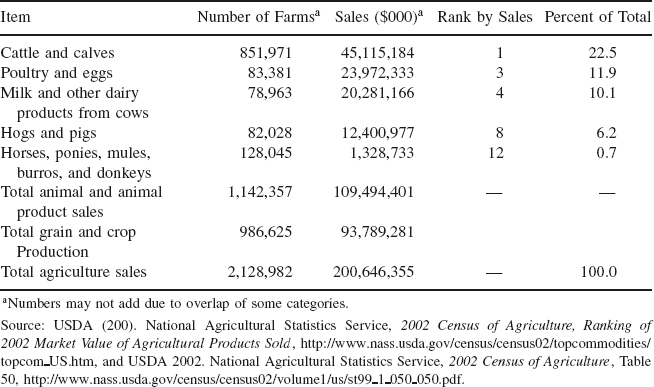 Current US policy is to have a variety of programs and methods to control the introduction of FADs to the United States by controlling importation of live animals and animal products that can present a risk of ...

Get Wiley Handbook of Science and Technology for Homeland Security, 4 Volume Set now with the O’Reilly learning platform.