Start your free trial
5.2.1.2 Paint programs
Paint programs are pixel based, meaning that the image that the user manipulates is typically
a bitmap (monochrome) or a color pixmap. In this case, the pixmap is used as the internal
data. If the user uses a brush to modify the image, the modiﬁcation to the canvas window is
handled in the event procedure as above, but the image that the user is editing is also updated
so that when the repaint routine is called, it can use a function such as XCopyArea() to
copy the portion of the image onto the canvas window. This is also a case where the event
handler may draw directly onto the window.
If the program starts up and already has an image to work with (e.g., the user requests to load
a previously saved image that was stored into the ﬁle), do not render the image onto the paint
window before xv_main_loop() is called. Eventually, the repaint procedure will be
called and the image should be rendered at that time.
5.2.1.3 Text-based programs
If you want to display text, as in desktop publishing packages, or if you just want a simple
program that displays a window with text, then the same thing applies as with the previous
examples: render the text in the repaint routine based on internal data (e.g., a text string or
set of strings). Again, the data must contain enough information to allow your repaint routine
to repaint the text as it was intended (e.g., font type, style, size, color).
Event-handling routines that accept keyboard input may render the new text directly to the
canvas window, but the text entered should also be saved internally for the beneﬁt of the
repaint routine.
5.2.1.4 Visualization programs
It is common to have an application that displays the time, network trafﬁc, CPU usage, ﬁle
system integrity, or the current Dow Jones Industrial Averages. Such applications get their
data from a variety of sources such as the system clock,
UNIX sockets, the ﬁle system or the
output of another application that has been forked. In the past, such applications might have
been written where the repaint routine accesses the information. This model does not apply
in a networked windowing system because of its asynchronous nature; the window system
and the application may not be in sync. A program should have a separate method for
retrieving data apart from the repaint procedure. See the program animate.c in Chapter 20,
The Notiﬁer, for an example.
In many of these cases (with the possible exception of the meters), if the application is well
designed, the repaint routines and the event handlers may be calling the same internal rou-
tines which render graphics. Therefore, when writing functions that draw into a canvas, you
should consider the generic case where the function could be called from a repaint routine,
event handler or anywhere else. The canvas_event.c shown in Example 5-3 calls the repaint
routine directly from the event handler.
90 XView Programming Manual

5.2.1.5 Rendering graphics
The preferred form of rendering graphics from an XView application is to use Xlib graphics
calls. Volume One, Xlib Programming Manual, has a complete discussion of Xlib graphics
programming. Throughout this book, you will ﬁnd examples of drawing into canvases using
Xlib graphics routines. Appendix F, Example Programs, has several longer programs that
demonstrate Xlib graphics. The XView graphics model, which is available, is almost identi-
cal to the SunView model for graphics and is provided for backwards compatibility with
SunView. Because XView graphics calls are wrappers to the underlying Xlib calls, these
functions are not recommended for graphics-intensive applications or for use by program-
mers who are not already familiar with SunView.
5.3 The Repaint Procedure
It is always the responsibility of the application to repaint its canvas at any time. Even
though there may be a retained canvas that the X server maintains, there is no guarantee that
there will be enough memory for the server to maintain it. For this reason, all canvases
should install a routine to handle repainting.
To install a repaint procedure, use the attribute CANVAS_REPAINT_PROC and specify a call-
back function as its value:
extern void my_repaint_proc();
...
canvas = (Canvas)xv_create(frame, CANVAS,
...
CANVAS_REPAINT_PROC, my_repaint_proc,
...
NULL);
The repaint routine installed is called any time all or a portion of the canvas needs to be
re-displayed. This always happens when the canvas is mapped on the screen for the ﬁrst time
(causing an Expose event). If the canvas is not retained, the repaint procedure is called
when:
• The canvas is resized.
• The canvas has been moved in front of obscuring windows.
• The user uses the scrollbar to render a different part of the paint window visible.
If the canvas is retained and has not changed size, the server refreshes the window without
calling the repaint routine. This includes all exposures except for those that are the result of
a resize of the window or the initial mapping of the canvas onto the screen. However, if the
canvas is not retained, the repaint routine is called in all of these cases.
The repaint callback routine will be called once for each view the canvas is maintaining. If
the canvas has been split several times, then the repaint routine will get called for each view
that needs repainting. One of the parameters to the callback routine is a variable that
describes the region that has been exposed or needs repainting. When a window is initially
Canvases and
Openwin
Canvases and Openwin 91 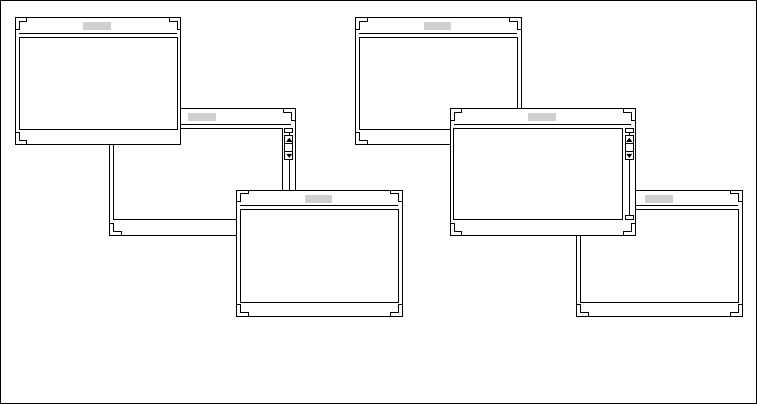 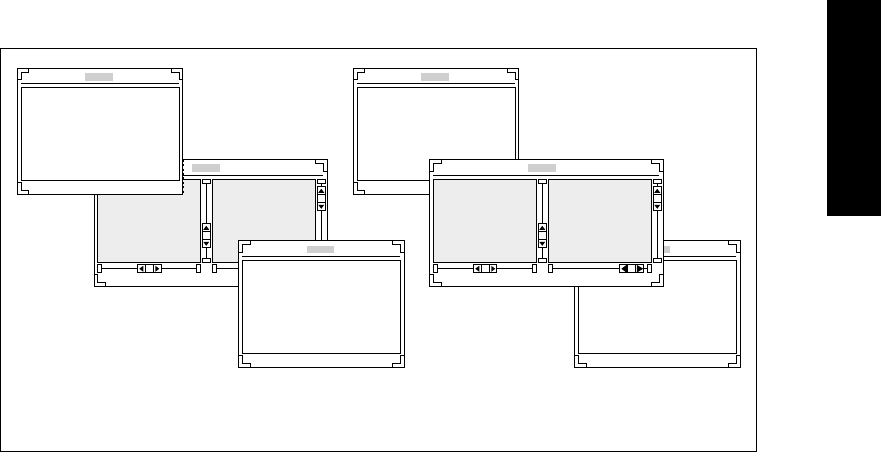