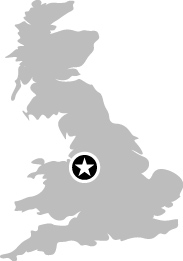 The Jodrell Bank Observatory’s enormous Lovell Telescope may have been relegated to third place in the category of biggest movable radio telescope, but it has an illustrious history, is open to the public, and is set in a bucolic location on the Cheshire plain.

The observatory started life as a botanical garden run by the University of Manchester. In 1945, physicist Sir Bernard Lovell brought surplus Second World War radar equipment to the site, in order to escape interference from the electric trams running through Manchester, 30 kilometers to the north.

Lovell had worked on radar during the war and planned to reuse radar equipment to study cosmic rays entering the Earth’s atmosphere from space. By the end of 1945, Lovell had shown that odd echoes appearing on military radar were, in fact, caused by meteor trails in the upper atmosphere. He quickly realized that much larger and more sensitive telescopes were needed, and a series of dishes was built in 1947, 1957, and 1964.

The 1957 telescope, then called the Mark I and now called the Lovell Telescope, was switched on just in time for the Soviet Sputnik 1 mission on October 4. Sputnik 1 and its booster rocket went into orbit, and while the ...