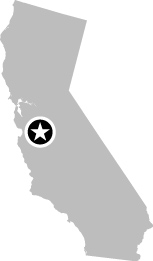 For the true Apple fan, visiting an Apple store isn’t enough: a pilgrimage to Apple headquarters in Cupertino, California, is a must. Apple’s campus is located just off Interstate 280 south of the De Anza Boulevard exit. Starting from San Francisco International Airport, the building is about a 45-minute drive down the self-proclaimed “World’s Most Beautiful Freeway,” which avoids the grubby industrial parks of Silicon Valley and takes the scenic route down the San Francisco Peninsula.

Arriving at Apple’s campus off De Anza Boulevard, you’ll come first to 1 Infinite Loop, the main office of Apple’s six HQ buildings. The road circles around, surrounded by parking lots; between the buildings are landscaped gardens for Apple employees.

In front of number 1 is a sign written in two Apple fonts: the number 1 is in Apple’s old Chicago font (still seen on older iPods) and “Infinite Loop” is in Apple’s version of Garamond. But that’s not the only secret message for the initiated: the very name of the street is joke for a computer programmers.

Fundamental to the operation of computers is the ability to repeat operations. And the most common way to repeat is to loop: to go back to the beginning of ...